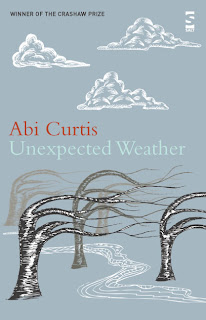 Abi Curtis' debut collection, Unexpected Weather, sounds like a quintessentially British divertissement, opening as it does with "Lady Jane Grey" and closing with a "Bean." But Curtis gets wryly and slyly to the Gothic heart of the English country house/garden, revealing its passionate heart and eccentric imagination, particularly in several poems about English inventors such as George Gabriel Stokes.

Stokes is one of several figures who stand at the edge of cliffs (see also "Poem at the Edge of a Cliff") both literally and metaphorically looking across the chasm that separates Britain from the rest of the world. Curtis' poems are often avowedly archipelagic, looking with a loving eye at the flora and fauna (especially the lovely "Mole") of the British Isles, but they also explore -- and expand beyond -- the seductions of our island mentality. "I was a gwailo," begins "Hong Kong", a prose poem dense with the shock of encountering the textures of another island ("the rot of blue eggs boiled behind doorways" gives you a sense of her command of alliteration and rhythmic patterning) that Curtis weaves into a history of empire -- or rather empires, with the island as a fault-line between the tectonic shifts of British and Chinese history.

"Hong Kong" is also a love poem, an account of an intimate meeting (encoded in its dedication, "For Simon") and love is the book's most consistent unexpected weather. While only the first few poems are explicitly I/you lyrics that intimate a confessional voice, they create a prevailing atmosphere skying over a terrain created by the meeting of two people, the shifting and uncertain borderland of love somewhere between one and two. This unexpected weather leaks into the love poems, shifting easy presumptions about the confessional voice, especially as the reader encounters skillful dramatic monologues that expand the whether of the confessional first person.

Will have to get this. Thanks for the review.