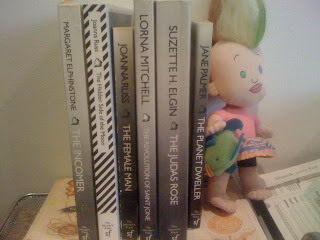 Little Endless Delirium with some of the Women's Press Science Fiction to be found in Delirium's Library (well, all that could be found: the rest has been put somewhere Very Important and Easy to Locate that I now can't remember - hence the name of the library) including Joanna Russ' The Female Man and The Hidden Side of the Moon.

Feminist science fiction pioneer Joanna Russ has died, aged 74, on 29 April after a series of strokes. Christopher Priest's obituary for The Guardian does an excellent job of explaining why her work was so important (and unjustly neglected), but it doesn't describe the impact of reading it: while Eleanor Arnason writes that she found Russ' work abrasively angry, she also notes that thinking about Russ moves her to want to write more.

As much as the sexual anarchy and political energy of Russ' work, it is this will to write - to share stories, to reinvent them - that I take from her work. Her humour, her generosity to her characters (who tend to reappear from short story to novel), her critical thinking about writing, are embodied in her appetite in later life (according to Priest) for slash fiction, which derives part of its charge from busting open canonical texts, and part from doing so in a supportive, reciprocal community. In her introduction to Chinks in the World Machine, Sarah Lefanu notes that many feminist SF writers began by writing slash or (earlier) novelisations of TV episodes. That idea of fiction as a communal practice, as a shared art, a conversation -- and refuting the denigration of such an idea within capitalist patriarchy with its demands for the Author and [his] Originality -- is central to both Russ' embrace of science fiction as a recyclic genre, and to her witty (and yes, purposively angry) critical writing.

In reworking, she salvages and surfaces the unpredictable: not just untold stories, but untellings.

When Janet Evason returned to the New Forest and the experimenters at the Pole Station were laughing their heads of (for it was not a dream) I sat in a cocktail party in mid-Manhattan. I had just changed into a man, me, Joanna. I mean a female man, of course; my body and soul were exactly the same.
So there's me also.

While Joanna [Russ] has died, Joanna (and her parallel selves Jeannine, Janet and Jael) show us possibilities for who we can all be, also.
Posted by Delirium's Librarian at 11:26 pm

Good post! Priest's description of Russ's reaction to slash is taken from this interview with Conseula Francis and Alison Piepmeier, which is a very interesting read.

Thanks for the link, David. It's great to have more of Russ' voice shared and sharing.