"anyone can do it, if they want to be peculiar enough" [AL Kennedy] 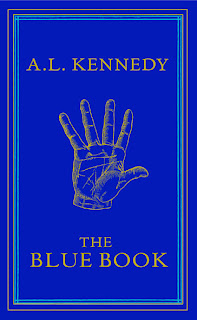 Thanks, AL Kennedy. The Blue Book pretty much cancelled me. With its sleight-of-hand whereby a seeming cynicism, all-pervasive, is turned into bittersweet sensation, the absoluteness of open emotion. No, not sleight-of-hand: that's to slight the magic. Beth, the protagonist, loves the word 'prestidigitation', and Kennedy, I suspect, does too: loves it as a diversion from what she's really doing. "Look, all hands/no magic," The Blue Book says. Fiction is just cold reading, performed chillingly in interstitial chapters that address "you," building up a portrait of the reader through small ephemera that seem impossibly accurate -- until you read a description of how Arthur (Art, haha) and Beth use informers and cold reading to build similarly accurate (because close observation marks us all, generically, human) pictures of the audiences for their psychic shows.

But Kennedy's a Penn-and-Teller of a magician: even as she appears to unfold the secret of the trick, shaming the reader for being gulled and the writer for gulling, she recuperates that shame by finding, in it, a necessary generosity, large and stunning. A final reveal that Kennedy's bone-deep irony and bitterness (as exemplified by her endlessly readable columns on writing and politics for the Guardian) are manifestations of a skinning, shredding love. She lurves humans, she does. To which she responds: "No, I don't. I don't love humans. And if you tell anyone, I'll kill you." [A for Anyanka, anyone?]

Almost impossible to read, The Blue Book: I can't imagine what it was like to write (and I don't have to: what the columns don't cover, the book describes -- as having fingers in the guts of the grieving). Kennedy's advice to would-be fake psychics - "anyone can do it, if they want to be peculiar enough" - is, I think, also her advice to writers. It's a bloody peculiar thing to do, make up lives and codes and patterns, lead the reader by the nose, for their own good. And then there's that "enough," referring to both "want" [if they want it enough] and "peculiar" [to be peculiar enough]. In each case, the word is an empty silk top hat with a rabbit (not) in it, the opposite of what it seems. Enough means "there is no enough." Not in a Zen "there is no spoon" way. In the sense that anyone reaching into that peculiar space will - must - find that the limits and boundaries keep falling away.

Which is why, despite being over-awed by the majority of the book to the point of burning my manuscript and keyboard, I found the very end made me go: huh. It was the second such 'huh' in as many days, the first belonging to Meg Rosoff's There is No Dog, a book that answers one of life's most pressing questions: is God a spoilt, sex-obsessed eternal adolescent boy (who happens to be very, very good-looking and occasionally inspired)?. 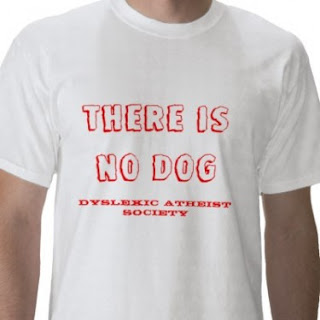 The book's answer is 'yes and no', and it's absolutely brilliant. Like The Blue Book (oddly, Rosoff's book is also blue -- night sky in the UK edition, summer's day in the US), There is No Dog is about authorship and authority (and Rosoff writes just as well as Kennedy about the impossibilities and painful peculiarities of authorship on her blog), about taking dazzling narrative leaps, and about how absolutely amazingly amazing sex is. Well, desire. It has more testicles and wanking (or, curiously, "wanting" according to my spellcheck) than an episode of the In Betweeners, but it can't find a way out of the conundrum of desire -- either God's desire for Lucy, which causes the weather to go haywire (phew, not global warming then, off the hook for that one), or Lucy's desire for the eminently unsuitable Bob (God's actual name), which causes her to lose a capybara. No-one else even likes Bob -- Kennedy's Beth finds that her father feels likewise about Art.

And yet each novel offers Romantic Lurve as the Solution: coupling up being, apparently, as good as it can get. Lucy sees the Error of her Ways as far is Bob is concerned, but there is (of course) the Better Bet waiting to Complete Her. And Beth hardly marries Art in a flourish of tulle and confetti, but the end of the book uses the reader's hope to bring them together. Or rather, to hold them in a limbo that is only possible because it is suffused with our hope for their togetherness, tempered by the knowledge that they have each done Terrible Things. This is a problem. And there it was again last night at the end of Miranda July's The Future.

What I love about all three of these works (The Blue Book, There is No Dog, The Future) is that they ARE peculiar enough, as peculiar as the world is and in love with that peculiarity. And I love that all three of them are about hesitancy, complexity, doubt, multiplicity, indeterminacy and really, really great sex. Let's hear it for female desire and amazing depictions of orgasmic embodiment. But… but… but… is what lies beyond orgasm really, only, ever able to be: waiting. For him to come and find you. Really? I'm all for vulnerability, openness, companionship and even (I have problems with the word and its history of asymmetry and violence) love, but I feel like there's a dual, interrelated problem here: neither the novel nor love is peculiar enough.

To deal with the peculiar -- the particular, individuated, sui generis -- is to deal with the shift in the word's meaning, its encoding that whatever is remarkable and particular to a person/situation/place/object is deemed to be an enormity: that the individuated (not in the sense of individualised trainers), the contortions of a specific psyche, the instances of a history and their working-out, needs must be socially conformed. The novel as a form trembles on the cusp of the Enlightenment argument for individuation and utilitarian/economic arguments for the mass. It serves both tyrannical masters. Characters must be peculiar - but that peculiarity has to be either condemned or smoothed out. Kennedy is a genius of the peculiar: her short stories often leave me gasping at their intensity of intuition.

But the novel (and the novelistic narrative film) is resolutely not a peculiar form: no time-based narrative really can be, unless taken totally apart and restructured according to other, rigorous rules. At first, I thought The Future was making these new rules -- in relation to films such as Chantal Akerman's Jeanne Dielmann, which is similarly concerned with wayward dailiness whose cyclicity cuts against the linearity of cinematic time; or Sally Potter's Tango Lesson, which uses the temporality and hapticity of dance to create an unusual rhythm that twines, thyrsus-like, around the forward movement of the narrative -- but it abandons or unravels them.

What derails The Future, There is No Dog and The Blue Book is the insistence of coupled love as closure. This is not peculiar. It's neither particular nor strange. It's normative. It conforms (to) the novelistic shape of narrative, trapping its characters, foregoing larger questions of responsibility and forgiveness, questions about authorship in fact. All three texts hold up their injured paws at the end and ask us to love them -- for all their flaws and failures and half-starts and lack of finesse, which is peculiar and which draws me to these particular artists (artists of particularity). But to love these books (and their authors) all the same: to look away, to be sleighted. To love the form, even as we've been shown its foibles and failings. To love its reliance on (and our [manufactured] desire for) closure -- even as each text works towards openness, that expectation is invoked and so The Future feels hesitantly, indecisively unfinished rather than open; There is No Dog has its romantic ending by deus ex machina (in a new sense, but still); and The Blue Book asks its reader to become Art, and thus to be a figure of desire -- and then to desire.

There are other ways, I think: they're rare and complicated and perhaps too peculiar for anyone not peculiar enough. Charlotte Brontë's last novel Villette chooses a deeply perverse form of waiting-that-is-not-waiting, a wild temporal and affective leap, that perhaps explains why the novel is not as popular as Jane Eyre, which delivers: "Reader, I married him" (although Canadian poet KI Press has a terrific sequence in Spine that explores the odd taste left in the mouth by that marriage). Reviewing Arrietty for Eyewear, I suggested that

Arrietty doesn’t give the audience what it wants, but what it needs. Rather than a closing a satisfying narrative about how non-human Others (toys, pets) should love (ie: submit adoringly) their human masters and conform to a human-shaped world, as the third Toy Story film did relentlessly, the end of Arrietty opens out into risk, an unfamiliar gesture for a children’s film. Arrietty lights out for the territory.

That movement towards freedom (independence within relationality) is a movement towards the peculiar, towards a space in which to be individuated without being isolationist. Anne Carson, who says she wants to be "unbearable," produces that space for her protagonist Geryon, at the end of Autobiography of Red -- and in the epilogue interview with Stesichorus/Gertrude Stein, who speaks about the vocation of peculiarity as an unblinkingness. That painful difference again: Kristin Hersh talks brutally about it in today's Guardian, about whether making music is worth the elation, depression, possession she experiences.

Maybe, brought up in the Messianic tradition of Judaism, in which waiting for Him is all, I hate it particularly -- and find that model infuses so many Western texts. Both the waiting and the satisfaction, which is another form of waiting (happily ever after, really? Surely not. Surely just waiting for another in the catalogue of Terrible Things that make up the shape of narrative). I like endings that are beginnings: open, ecstatic. Endings that leave behind the lack that the story sets out the start: I want this. I don't get it. Fine: I'm free of wanting. That's a story of creativity too: I want to make this. I don't make it perfectly. Fine: I'm free of wanting to make it. It's made. It's gone. Paradoxical Undressing suggests that Hersh makes/records music in order to be free of its wanting, its demands on her. For music, we could put: love, humanity, the form, creativity, this one person, whatever. But at the end of the interview, she suggests something, an ending, peculiar enough:

"But what if we die?" she says. "What if we die and there's music everywhere?" And she laughs at what a great cosmic joke that would be.

What if, at the end, the desire that has hounded us -- the writing, the loving, the person -- is just "everywhere"? What if the bond of demand is relinquished, if we go into that which we want and wants us, but without want?

I don't know how to write that kind of ending: elsewhere in the interview, Hersh suggests such an ending is suicidal. But when I read those lines, I know that's what I want to find/to write. And so begins the Buddhist conundrum of not wanting to not want. Enough/not enough.
Posted by Delirium's Librarian at 1:27 pm