Wanna Be in My Gang?: Reading Girl Gangs & the Problem of Violence 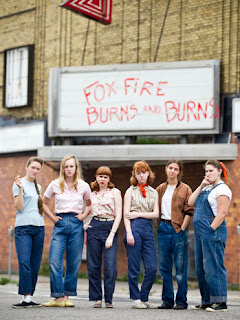 Everyone loves a girl gang, right?

I ask because posters for Foxfire followed me around Paris this yearturn as I read:

Girl gangs - monstrous regiments of women - nunneries - dovecotes: whatever you want to call them, the idea of a group of women working together towards a powerful and public project fascinates us because, I think, it's so rarely portrayed in our culture. All of these books explore the particular loyalties, tensions and strengths that connect these groups under the deformative pressure of patriarchy (call it Nazism, the Church, apocalypse or the Romans, as you will), but they are unsettled when investigating the question of how women might fight back against this pressure: all, as writers, have chosen the word, and yet the fascination with the sword remains.

Earlier this autumn, I spent some time thinking about Lizzie Borden's 1982 film, Born in Flames, about a group of women who organize in New York City against a stultified socialist revolution. Borden's characters train for violent resistance, but are shown using it as a threat rather than actualising it, instead targeting media and raising consciousness through anarchist tactics.

Butler's Parable and Borden's Born in Flames share many resonances, not least their diverse characters, with a radical emphasis on African-American and Latina women as activists and leaders. They are also both science fictions of the near and possible future, whereas the other three books are historical fiction. All of the books are also - broadly, and unlike Born in Flames - concerned with religion, as both social construct and faith.

Why put together girl (or girl-led) gangs and religion (Judaism and Christianity, to be specific)? There's no doubt that a powerful charge arises from telling women's stories in the most unlikely settings: and not just the story of a singular, outstanding woman but of women interacting with each other, and - in the case of The Dovekeepers in particular - of women's knowledge (keshaphim, women's magic) and its oral, inter-generational transmission.

But that camaraderie, which in itself forms a kind of resistance to the patriarchal world (even in The Corner That Held Them, where the nuns spend a good deal of time wanting to escape the cloister), is shaded by another type of resistance, one that sits - I find - uneasily with it: that of violence. Aziza, one of the four dovekeepers (whose role suggests their connection to peace), dresses as a man in order to fight in her brother's place, for example. Alongside this gender slippage - which Hoffman handles very powerfully, as Aziza finds love with another warrior who accepts her as transgendered - there is another performance, particularly in Citadel, in which the women use hyper-femininity (or "feminine wiles") to carry out their plans for sabotage.

I can't quite put my finger on what unsettles me about the triangulation of magical/occult camaraderie, breech-part violence and hyper-feminine espionage, but I think something about it disturbs both Mosse and Hoffman as well, who provide spectacularly punitive endings to their (very long, absorbing, close third person) novels. The death of Sandrine, the protagonist in Citadel, is practically pornographic in its intimate physical detail: a grenade lands by her thigh. Is it that women are to be punished for trespassing on male territory? Or a restatement that war is bad and women its victims?

Only Butler and Borden fully explore the analogy that these stories might be making between war and gender politics: that of "sleeping with the enemy." In Butler's Kindred, this is also explored across race and class lines in the antebellum South. Warner, by walling her women into a convent and showing how they both thrive and chafe, creates a fascinating ambivalence, as she does in Summer Will Show, her tour-de-force about a lesbian couple involved in the Paris Commune, about the intimacy of women and history.

What Warner and Butler reflect in their stories, and Hoffman and Mosse struggle with, is that neither intimate nor political relations can be equal until society is; all four novels show groups of women struggling against inequality in all its violence, but Mosse, in particular, turns that violence in on her characters rather than propose or investigate a radical social shift. Writing historical fiction makes that difficult, of course - but Warner manages it in Summer Will Show, as her protagonist sits down to read the opening of the Communist Manifesto.

I wish I had as satisfying yet open an ending to this post. I suspect my enthusiasm for girl gangs - for reading about girls in books, and seeing girls on screen - will burn and burn.
Posted by Delirium's Librarian at 2:58 pm