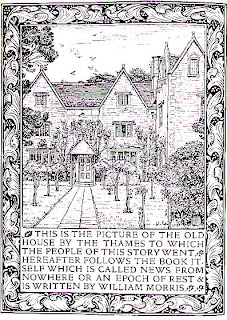 'Strangely?' said he. 'Is it strange to sympathise with the year and its gains and losses?'

There's not many science fiction novels whose plot motor is getting upriver for the harvest. Maybe only one: William Morris' News from Nowhere, first published as a book in 1890. It opens with a disgruntled man leaving a Socialist meeting in London, where discussions "as to what would happen on the Morrow of the Revolution" had turned into a petty argument. He walks home to Hammersmith, and wakes up the next morning a century in the future, on that morrow. He travels through London and then down the Thames with a friendly utopian, shipping up at Kelmscott Manor, Morris' own house of later life. At the culmination of the book - at a harvest feast in Kelmscott's village church - the narrator simply fades from his companions' awareness, returning to his house in present-day Hammersmith.

It's an incredibly efficient and effective narrative device, one that opens up the real motor of the novel: how did the world change? And how does that change follow from, and bear out, Morris' own practical and political socialism.

Morris' first person narrator is at once overwhelmed with happiness and apprehensive about the post-industrial, post-capitalist egalitarian utopia in which he has awoken, and it's this combination of delight and melancholy (that change has not been achieved in his own time) that draws the reader on through long dialogues with utopian citizens. Morris breaks that hoary saw "show don't tell" endlessly: his characters, who predominantly disapprove of books, turn telling (back) into a vivid art. There are didactic strictures on labour, class, exchange and architecture, and plenty of them, but they are delivered in character and in tonal harmony.

Morris places some excellent and entertaining (to me) rants about the novel as a form in various characters' mouths. While art, architecture and craft - indeed, all forms of physical and material beauty - are highly valued in the novel, the linguistic arts, whether conversation or letters, are looked on with suspicion, giving the novel a curiously astringent character, an asperity towards its own means. And indeed, as a literary work, it fulfils the contract it sets out by not falling into any of the traps it identifies. Here Ellen, the most perceptive of the utopians, the only one who can see that the narrator is from the past, comments frankly:


As for your books, they were well enough for your times when intelligent people had but little else in which they could take pleasure, and when they must needs supplement the sordid miseries of their own lives with imaginations of the lives of other people. But I say flatly that in spite of all their cleverness and vigour, and capacity for storytelling, there is something loathsome about them. Some of them, indeed, do here and there show feeling for those whom the history-books call 'poor,' and of the misery of whose lives we have some inkling; but presently they give it up, and towards the end of the story we must be contented to see the hero and heroine living happily in an island of bliss on other people's troubles; and that after a long series of sham troubles (or mostly sham) of their own making, illustrated by dreary introspective nonsense about their feelings and aspirations, and all the rest of it; while the rest of the world must even then have gone on its way, and dug and sewed and baked and built and carpentered around these useless - animals.

Take that, Jane Austen. Ellen is also perceptive as to the effects of this cultural production on the minds that absorb it, noting later that the narrator ' "nurse[s] a sham sorrow, like the ridiculous characters in some of those queer old novels." ' She's right: and it's part of what's gripping about the second half of the novel: the narrator's absolute conviction that he will lose, or be dismissed from, this utopia. Ellen identifies it as a self-fulfilling prophecy: the narrator is held back from his full participation in the utopia by his conviction that he must lose it, that he is unworthy or unwelcome, and also right that this mode of thought derives from his cultural background. He cannot prise himself out of the narrative mode and shape with to he is accustomed.

But the narrator experiences his awakening as a wake-up call. Morris was deeply familiar with medieval poetry (not least through the creation of the Kelmscott Chaucer), and the motif of the spiritual dream in which the dreamer is saddened to awake from his vision of heaven, but also invigorated by awakening with his new knowledge, is echoed by the end of the book. The narrator remembers 'Ellen's last mournful look' and interprets it as handing him a mission for his return, to work towards the realisation of the future he has seen. So the experience narrated by the book takes its place as the 'dream' intended by medieval poets, rather than Symbolist or (given the book was published in 1890) psychoanalytic writers: as a revealed reality, experienced through intense longing.


Yes, surely! and if others can see it as I have seen it, then it may be called a vision rather than a dream.

With this final sentence, News from Nowhere also sets out a new vision of the novel as utopian form or project: not to draw the reader in through a cascade of inorganic crises and tensions leading to  a normative and normalising resolution, but to present its world-building as a vision: detailed, and even dove-tailed, as Morris' narrative architecture is. Why shouldn't the year's gains and losses be as effective and intriguing a rhythm for narrative as the three-act structure?
Posted by Delirium's Librarian at 6:38 pm