"The strange event is not the rupture": Being Followed Home By a Wannabe MC While Reading Simon McBurney's Who You Hear It From

"The rupture," McBurney continues, "is what this strange event reveals." He's writing about the three central characters in Theatre de Complicité's The Elephant Vanishes, in an essay collected in Who You Hear It From. A pocket-sized volume, it unfolds (like Complicité's shows) to take in the whole world and fold it up inside your head, where it zings around, making change. 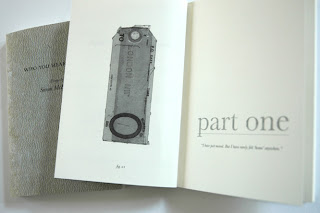 So I was walking home with McBurney's thoughts about never feeling at home, feeling dis/located and dispersed by a rare encounter with someone in my professional life who, three degrees of interrogation/separation, knew members of my family. Worlds collide: is that part of feeling at home in them, or feeling unsafe in them? The rupture – the dislocation of my professional, academic and creative self from my upbringing – is what the strange event reveals.

It's a potent formulation for impact, interruption, crisis. Over the last month, I've been assisting with the creation of an online anthology that looks exactly at the "strange event" and its rupture, Against Rape. Contribution after contribution argues that the rupture – that is, the violent framework of kyriarchy – is what the "strange event" of rape reveals. Rather than seeing rape as an isolated violation, a momentary incursion that creates a private trauma, one that is often characterised as inexpressible, McBurney's reasoning suggests that rape is so traumatic because it brings home the status quo. It's an extreme statement of the micro-aggressions of asymmetrical power that we live with everyday. It means we can't deny or avoid them anymore, nor claim exemption from them. We have to engage with the fact they are structural.


Of course, the universe being the universe handily delivered me evidence on my walk home (you can't, as Complicité's shows show, make this kind of co-incidence up). A man walking along the street behind me, yelling insults (I sneaked a glance) into his cellphone. Not such a strange event: the incursion of private thoughts and debates into public space. Stranger, though: he wasn't pausing for breath. Moreover, he was rhyming. I rewrite the narrative: a wannabe white MC recording his try-hard flow in the echoey acoustics of the street, with a fireworks backbeat. He was loud, large and audibly high, so I kept my head down and walked. Made myself invisible. But, with two references, he made me feel not just visible but naked in the cold: the smackdown "I squeezed your girlfriend's breast like a rubber duck," and a paranoid reference to "grimy Jews." The rupture is what the strange event reveals: violence shows our vulnerability, hitting us with our capacity to be hurt. Instinct says turn and run. Instinct says turn and shout him down. Rationality kept me walking, steadily. Recorded the phrases in my head until I was home safe.

Except "home safe" is a myth. Not because my (quiet, suburban) neighbourhood can erupt with that kind of violence; to me, growing up with domestic violence, that's a given. Or not just because. But because bricks and mortar, streets and signposts, aren't my home. Why did I feel unsafe, threatened, caught out and contorted? Why, for the same reason I contributed to Against Rape: because language is my home, and I feel responsible towards it. Working for English PEN, I'm steeped in arguments about the difficulties of defining offence. Concepts of hate speech are inadequate because they don't allow for the mobility and fluidity of language, its polyvalence and its contextuality. As for censorship, well: the repressed always returns.

Rehearsing the rhymes in a conversation with friends (many of them poets), I had an insight: the strange event let me see the rupture. This is what I wrote in that conversation:


Actually the creepiest thing about it was its incoherence, in which anti-Semitism, misogyny, homophobia were like Homeric epithets: just filler, spacing, a way to make the rhyme or beat. There was no argument or logic, just an associative chain in which smackdowns and hate speech are part of the rhythm. You can't argue with that, or refute it. It's a grammar not a vocabulary.

It's a question of syntax, not semantics. The individual lexical units are "strange events," insults flung onto the crisp night air, but in a way they are meaningless. This isn't a particular problem of freestyling, which reflects, perpetuates and partakes of the larger dominant culture of which it's part. Both the "battle" ethic and the syntactical spacing of a few incoherent fragments of argument with put-downs, dismissals and empty threats can be heard any time of day on BBC Parliament. It's the grammar of orature inherited from the Roman law courts, amplified by the dual growth of capitalism and parliament, both espousing ruthless competition and utilitarianism.

So here's the rupture: the sentence of our culture is broken. Subject Verb Object obviously makes someone/thing a subject and someone/thing an object and insists they have a relationship dependent on action and on asymmetric power. That's among the reason Gertrude Stein had a problem with nouns (other than that stable naming is impossible and inflexible) and liked participles or gerundives: they both relieve and point to the pressures of subjectivity and objectification.

But still SVO is the grammar of our grand narratives, of our legal system, of the way we engage with each other, and with cultural texts. It's far from universal: McBurney talks in "The Elephant Vanishes" about how, in Japanese, "particles, not the order, tell you the function of the different [sentence] parts." The more inflected a language (that is, the more single lexical units contain statements of relationality to time and space, and between interested parties), the more flexible its sentence structure.

How do we unfix the sentence structure of EuroWestern culture? To me, this seems both a more challenging and more potentially useful task than trying overtly to alter the meaning of lexical units used as pejoratives. Semantic meaning alters constantly, as the word "queer" demonstrates, through registers of usage. Working to change meaning without changing structure is like, well, any protest, campaign or revolution that changes a detail without changing the system. The inequality that underlies the production of meaning remains – and remains in the hands of power.

Talking about the poet Stesichorus in the introduction to Autobiography of Red, Anne Carson says he was the first to "unlatch" adjectives, to unfix epithets from their Homeric regularity. Homeric bards, reciting their often very long poems, used these fixed epithets to fill regular metrical spaces, to pad out a line, as well as to retain the hieratic, ahistorical quality of the gods and heroes in their epic poems. Stesichorus, too, wrote about gods and heroes, but he was critical of them. He saw them as beings with ethical choices, not just figures on a vase. He fucked his culture's sentence up so badly that, according to legend, Helen cursed him to blindness after he wrote a poem that questioned her role in the Trojan War.

It's a cautionary tale about what happens when the strange event leads you to see the rupture and you realise you can't look away from it, and you can't not point it out to others: you get blinded. Especially if the rupture you point to is what you're supposed to see as structure, the thing that makes sense of everything, the thing that holds it all together. Like Carson and McBurney, I believe that cultural work can make an intervention: it can make the rupture visible and it can provide, or at least speculate on, a new grammar. Better, it can demonstrate that we are capable of understanding multiple, shifting grammars and don't need a fixed one (a "home") at all.
Posted by Delirium's Librarian at 5:05 pm