Squint Your Eyes and Look Closer, I'm Not Between You and Your Ambition 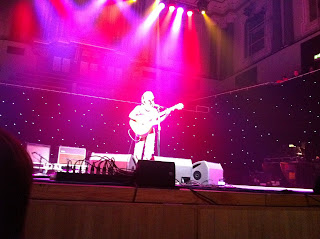 Some weeks it's good to be a(n ageing) riot grrrl (woo grrrl, did this article from Friday's Guardian with "20 years ago" in the headline make me super-aware of my growing Sontag). But I'm not alone in growing old disgracefully and ever more riotously (can you be a riot wrrrrmrrrrn?). Carrie Brownstein, Sleater-Kinney badass, is writing a TV comedy series called Portlandia for IFC, which includes the (so, so untrue ;) Feminist Bookstore sketches (early versions can be seen at ThunderAnt). PJ Harvey has a growly-melodic wild new album (the aptly named Let England Shake) out soon, and Patti Smith said in an interview that she's been

listening to Polly Harvey's new song – she has this new song, The Words That Maketh Murder – what a great song. It just makes me happy to exist.

And, oh yes, this Saturday I went to see Ani Difranco in play a solo set in Dublin with my friend Natalie and a group of women from Running Amach.

Natalie and I worked out that we'd been to at least three of the same Ani gigs before we even knew each other -- bound by the solidarity of queer/feminist independent music (the Righteous Babe pose is pretty much the secret handshake you always wondered if queer women had to find each other ;). We also worked out that this was the best gig we'd seen for years: the most energised, inventive, alive and well, rioting. There were a couple of new songs -- Amendment and Promiscuity -- that offered complex, narrative analyses of politics and people as they entwine (the set list we reconstructed is here -- and more photos here, by Rosa Paolicelli).

Ani gigs, being a rare constant in a blurry, confusing life, often make me remember previous Ani gigs: the first one I saw (after winning tickets from DIVA!) in Shepherd's Bush in 1997, when she played "Swan Dive" and I instantly gave my heart to her (for some reason, I love songs where the female singer uses the word "tampon" -- blame riot grrrl). Or the first gig I saw in Canada, in the gym at the University of Guelph, two hours after being dumped; riding home on Coach Canada through the flattest flat fields in the world, listening to "Providence" and crying. Happy times. Whooping with a crowd the size of Lake Ontario outdoors at Fort York when she sang "To the Teeth," ending "I'm gonna take all my friends / Move to Canada / And die of old age" as the lights flared pink against the summer twilight. It was during Ani's set at the Cambridge Folk Festival in 2000 that I decided, for definite, to get my first tattoo; decided what it would be and where it would go. "Five foot two, wriggly and giggly," it feels sometimes like she's a livelier, brighter, more musical, more passionate (and more tattooed, although only just) version of me, leading the way out there. Because -- confession -- long before I ever wanted to be a poet, I wanted (needed?) to be a singer. Raised on Joni and Carole by my child-of-the-sixties mother, I grew my hair long and wrote lyrics (boxes and boxes full o' lyrics) on my grandmother's old Olivetti typewriter, bashing away in my room to silence out everything else. Sadly, musical talent passed me by, and I couldn't master those teeny keyboards you got in going-home bags let alone a full-scale instrument (despite my passion for Jacqueline du Pré). So instead I committed the lyrics of Little Earthquakes to memory (and analysed them for months in my diary). And how excited am I about Tori bringing a musical to the National Theatre next year? Already saving money for a sleeping bag to camp out for tickets. Second confession: I know it's much cooler to be a riot grrrl, to worship at the altar of Patti Smith and PJ Harvey (and I do). But the wellspring of my poetry is a response to the more lyrical, more trebly, more folky, more (gulp) girly vocals and versification of Tori and Ani.

This blog post honestly feels like a form of coming out. The critical consensus on cultural cool is such that there is a canon of alt.rock acceptable to cite in poetry, or even describe as poetry - Bob Dylan, Leonard Cohen, Joy Division, maybe the Pixies. Patti Smith seems to have made it there since Trampin'; Paul Muldoon has a PJ Harvey poem. (Everyone has a Dylan poem.) But those flauntingly emotive, excoriatingly intimate, musically brilliant female singers? Not a chance (although Ruth Padel has a poem about Tori Amos' Bosendorfer piano). They don't really do irony. They don't really rawk. Their voices are high in the mix, their lyrics treble and tremble with confession and the contortions of conscience. They are about tampons and goddesses and mothers and abortions and not being a pretty girl. But still being a girl. If that's even possible. They want to know who you are.

They sing straight out to the audience, to you in the audience, to you at home in your room with your Walkman on trying really hard not to hear anything beyond the headphones. They say "excuse me, but can I be you for a while" and demand that you be present, you be really there. In poetry, the invocation of 'you' is called apostrophe, and Jonathan Culler argues that apostrophic address (‘O beloved as thou art! // O lift me from the grass!’ from Shelley's 'An Indian Girl's Love Song') is almost absent from contemporary poetry because it exemplifies ‘all that is most radical, embarrassing, pretentious, and mystificatory’ about the act of writing poetry -- of addressing intimate thoughts and visions to an assumed, absent audience. It's scary stuff. It means opening yourself up.

So if loving Ani and Tori is embarrassing and pretentious, which I can sometimes feel in hipster poetic company where I don't get every Dylan reference, then it's also radical and mystificatory because of its vulnerability, its openness to the possibility of being undone. Not a bruised, wounded drawl but tears. But the tattoo of a wedding ring. Something previously unheard and singing.
Posted by Delirium's Librarian at 10:22 pm