Holiday Reading, or Order vs. Chaos

…in which I continue with the questions asked in the previous post about the randomness/associatedness of any given stack of books. Given that no selection is entirely random (not least because I bought or borrowed all the books and so my taste is a major associative principle), but also that some associations are unpredictably weird (both Jenny Diski and Margaret Atwood cite Franz de Waal's study of brown capuchin monkeys and their cucumber/grape value system -- zeitgeist?) I am also curious about why some books satisfied and others irritated, particularly relating to ideas of order and chaos.

One obvious connection/division arises instantly: science fiction and non-fiction. Pleasure/work? Or work/pleasure (or cucumber/grape, in the de Wall duality) (to risk echoing those irritating HSBC ads that accompany the journey into hell/the Ryanair boarding system). The books I was most excited to read were Anathem and Just Kids, having waited for all 1000 pages of the former to appear in paperback. I made a seemingly random decision (based on Ryanair's draconian cabin baggage policy and the capacity of my coat pockets) to begin my reading orgy with the relatively slim Delany -- and this may have been a strategic error. After Delany, most other SF seems laboured, laborious and portentous -- some would say that Stephenson and Lessing, both wordy authors with a love of didactic world-building, are prone to those faults even without comparison to Delany.

Einstein Intersection, from its euphonious title to its limpidly beautiful conclusion, might be a tenth of the size of Dhalgren, but is packed with similar ideas about travel, cyclicity, community, desire, curiosity, urbanity, and entropy. Its final lines are indicative of its ambiguous and generous nature: "As morning branded the sea, darkness fell away at the far side of the beach. I turned to follow it." I love that idea that turning towards the dawn is also following darkness.

Alas, none of Stephenson's atomic explosions could compare to that sunrise. Sylvia Townsend Warner's historical lesbian romance, set during the Paris Commune and told though the cycle of seasons and sunlight (as the title suggests), fared better in the inevitable comparison stakes: absorbing, witty, prickly, intelligent. It also shared with Delany's novel what's conventionally called an "open ending"; that is, that the final paragraph finds the protagonist setting out on a new adventure after failing to complete the quest that has taken up the course of the book. In each case, the protagonist spends the bulk of the novel striving for the love of a particular woman, and ends by losing that love to death. Lobey, Delany's Orphic protagonist, learns through an encounter with Le Dove (a Persephone figure) that he can change the myth, and journey rather than grieve -- an exciting conclusion that suggests change is possible.

Likewise in Summer Will Show. The majestic, infuriating Sophia Willoughby stays in the apartment of her dead lover, revolutionary Minna Lemuel (formerly her husband's mistress), rather than return to the living death of her Aunt Léocadie's patrician circle. She too starts on a journey, one that begins: 'A spectre is haunting Europe—the spectre of Communism.' Sophia ends the novel 'obdurately attentive and by degrees absorbed' by the Communist Manifesto. A highly dangerous text when Warner was writing in 1936, the Manifesto wrenches open not only the end of the novel but the very idea of the fictional narrative as having an ending -- and thus the relationship between writing "The End" on the final page of a novel, and the changeable nature of living history. 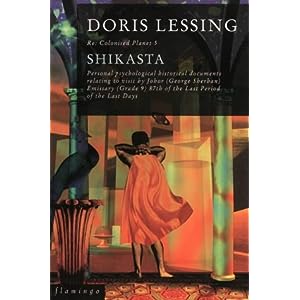 The Einstein Intersection was composed as Delany travelled around Mediterranean Europe, and shares with Summer Will Show a restless engagement, by rewriting, with European mythic history. Shikasta likewise grapples with myths, or rather with Myth, taking on Genesis and Exodus, explained as a Chinese Whispered account of the enlightened beings of Canopus colonising Earth (known in its latter days as Shikasta, the Broken). I initially pinned the novel as satirical, a dark comedy about the dangers and hypocrisies paternalistic imperialism, and I think that reading stands (why else write a novel that consists primarily of reports by alien/angelic functionaries, alternating in the latter stages with the diary of a character who is sacrificed to their 'higher' ends?) but there is a deadly (as in deadening) moral seriousness that accompanies it. The ending of the novel seems "open" -- in that it posits the rebuilding of Earth according to Canopean principles, and in that the book is the first of a sequence -- but in fact slams closed. The rebuilding of towns by a United Colours of Benetton assortment of well-intentioned characters is a nostalgic return to Edenic first principles bathed in the Canopean glow of SOWF, sense-of-we-feeling.

Anathem ends with a similar scene of communitarian rebuilding that is in fact a repetition of patterns sealed by a novel obsessed with geometry and things carved in stone; it doesn't mention Neolithic stone circles as Lessing does, but they appear in Frances Presley's Lines of Sight: not as Canopean symbols of cosmic alignment, but with their mystery intact. Stephenson, a mathematical whiz, loves a neat equation: whether algebraic, geometric or narrative, he likes his sums to come out right. For me, this makes his novels zero-sum games, which is after all the conventional structure: the story begins with order; chaos comes; order -- a slightly better, more thoughtful/wealthier/more pair-bonded order -- is restored, better protected against the coming of chaos. And they all live happily ever after.

In fact, Stephenson's novel is about the orderliness of order: it posits alien beings from other versions of our cosmos who (apart from a slight different in nostril shape) look just like us! How convenient, one might suggest, to erase in one stroke the metaphor of the alien as racial/sexual Other. These other humanoid beings have dyadic sex/gender, innate drives towards progress and violence, and (of course) Euclidean geometry. Orolo, the novel's expositionary character (in a novel that is 90% exposition, Orolo's use as the Basil stands out), leads the protagonist Erasmas in a "dialog" (the technical term given to Anathem's version of Socratic discourse) towards the realisation that this means that the bipedal, bilateral, heterosexual human form and attendant "human nature" are the closest to the ideal form (ie: Platonic) and therefore the best of all possible outcomes tended to across the polycosmi. This inclines Erasmas and the people of his version of the cosmos to welcome and collaborate with the incomers after scaring the bejayzus out of their leaders with a vision of the handily-named Everything Killers.

Sense-of-we-feeling, the notion that we are all the same under the skin, has been a valuable tool for peace-making and post-war reconstruction work, as well as for civil rights and human rights movements, and Lessing's impassioned denunciations of racism and sexism (as well as the amazing feat, at least in the edition I read, of featuring a character of colour on the cover of a science fiction novel -- something Ursula K. Le Guin has written about in relation to the continued whitewashing of Earthsea) are to be respected rather more than Stephenson's supposedly gender- and race- blind writing in which all the main active roles fall to white males. This is a problem with SOWF: that it inclines towards the sense that everyone is like us, where "us" means a dominant culture, handily allowing the representative figures of that culture to carry on carrying on, because they are now representative of everyone.

This is something that Jenny Diski and Giles Tremlett both touch on in their approaches to two very different dyads: human/animal and the two Spains (generally interpreted as Left and Right, but also expandable to nationalist/federalist-separatist; Christian/non-Christian; urban/rural; Barcelona/Madrid; men/women, and other variations that don't quite fall into line along left/right divisions). Diski is brilliantly insistent on the absolute Otherness of animals and the uneasiness that creates for humans as cultivators and companions (it also gives her an excuse to repeat the phrase "Derrida's pussy", which I found funny every time). She writes incisively about attempts to make animals like us (ie: to include them in SOWF), most wittily in her reading of LOLCat and the LOLCat Bible, which does a much more convincing job of revealing the strangeness of Genesis -- and the way that Genesis tries to harmonise the strangeness of existence -- than Lessing does in her systematic account of Canopean contact. 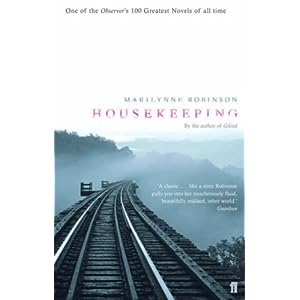 Rather than chaos, with its negative religious associations, maybe I should make the other term in my dyad strangeness. Although Housekeeping is, in its enchanting way, a hymn exactly to chaos: to the entropic, to letting go, to stepping outside order. The chaotic is a principle of strangeness, of the interruption of a system by something outside it, something with its own kind of order, like aunt Sylvie in Robinson's novel, who lets leaves blow into the house, but rinses and stores jars in the living room. Sylvie gives to Ruth, the young narrator, the gift not just of strangeness (difference) or chaos (interruption) but its refusal to conform to the system: a resistant Otherness. Ruth frequently uses the word "ordinary" for that quality she associates with her grandmother's house and the town of Fingerbone: a word that etymologically suggests the place of order in dominant ideals of human culture.

Much praised for its orderly, almost processional, use of language, the novel retains a formal strangeness (like Diski, it associates this strangeness -- and the chaotic tendency of human narrative -- with Genesis, rewriting the story of Eden and the Flood; Ruth and Sylvie, like Delany's Lobey, are destined to become errant wanderers, reversing the grand narrative of civilisation's "progress" from hunter/gatherer to settlement). Narrated by Ruth in the first person, it includes passages that offer impossible access to the thoughts and deeds of other characters (particularly her grandmother, long before her birth). While it appears to narrate the present through the convention of the past tense, suggesting that the narrative voice is close in time to -- possibly even coincident with -- the events described, the end of the novel suggests that it is very much a distant reflection from years later, a different kind of open-endness in its temporal reversal that is as dizzying and lovely as the repeated image chain that associates, inverts and reconfigures drowning in flying, and flying in drowning. The image chain does not draw to an orderly conclusion, but keeps generating, pushing at the strangeness of human movement through the elements. Like Ruth and Sylvie, Robinson's prose opts for a resistant Otherness. 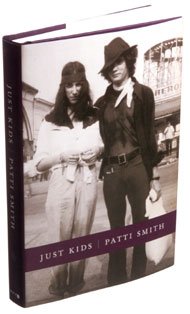 Patti Smith is insistent on the significance of this quality for her gallery of artist-heroes in Just Kids (Rimbaud, Blake, Kahlo, Hendrix): not in the sense that artists are Other than human, but that they are compelled by the dense, irresolvable mystery of what is not-I/us; not compelled to resolve or normalise it, but to enter into it. This doesn't preclude them from some of things associated with SOWF (kindness to others, generosity, material beauty, community), but it does mean they are uneasy about the homogeneity, passivity and -- for want of a more precise term -- niceness that SOWF implies in Lessing's and Stephenson's "let's all pitch in together" heartwarming big finales. Warner's Paris Commune is a less harmonious but more exciting vision of divergent personalities, aims and discourses united not by SOWF but by a healthy respect and curiosity about the difference of difference (the very difference that motivates the curiosity of Delany's Lobey). Smith draws a distinction between the 'incestuous community' of the St. Mark's Poetry Project and the mutuality of her connection with Robert Mapplethorpe: 'I understood that in this small space of time we had mutually surrendered our loneliness and replaced it with trust.' Trust is one name for what occurs between Diski and her cat, a surrendering of loneliness that is not a merging of discrete entities, but an echoic resonance replete with caution, tentativeness, contingency and commitment. Trust is open-ended, whether between living entities or text and reader.
Posted by Delirium's Librarian at 5:25 pm