When Did I Become Us?

Pas de deux by Norman McLaren may be the most beautiful dance film ever made (The Red Shoes has a thing or two to say in that argument but moving on...). It's 13 minutes of minimalist movement, backlit figures appearing as white light and shadow. But it's also a witty and profound joke on the title: there's way more than deux involved in this pas. Light tracery multiplies each dancer's body towards infinity, as they lose and join themselves and each other.

That sense of multiplicity within the individual - multiplied further when she interacts with any other, so that my relationship with you creates many other mes and yous through our interactions - is one of the reasons I'm fascinated by acting, whether on stage or screen. I'm particularly fascinated by meta-performances, for example Cate Blanchett's 'rehearsal' scene in Elizabeth, and by clones and multiples.

This is a particularly strong trope in the portrayal of female identities in current TV: there's been Dollhouse (which to be fair, had male 'dolls' performing multiple roles as well, but only two significant male doll characters compared to five or six significant female 'doll' characters), United States of Tara (which picks up on that old favourite, multiple personality disorder: rich pickings for Toni Collette, an abysmal shambles in terms of the representation of mental health), and now Orphan Black, which has clones.

These are not the liberatory, goofy, partial, carnal clones promised us by cyborg feminism and Lynn Hershmann Leeson's Teknolust, in which Tilda Swinton gives her ultimate performances as a brilliant scientist and her three cyber-clones who take on material existence. They are the scary, secret-science-experiment clones of Cold War-era science fiction, a step back towards the paranoid fantasies of an era clinging nostalgically to the idea of the unitary self and the unitary nation-state.

So politically and culturally, it's a bit meh, but there's an undeniable excitement in watching Tatiana Maslany performing the diversity of roles herself. While, like Dollhouse, it can feel a bit Barbie DreamWorld (there's Scientist Clone, Berlin alt.grrl clone, Soccer Mom clone, Cop Clone, Grifter Clone, etc.), it certainly passes the Bechdel Test (or does it? If they're all clones, is it a conversation between one or more women?) with its focus on a group of female characters contesting their relationship to one another - particularly contesting ideas of biology and essentialism.

By the nature of cloning the show excludes ethnic diversity from the clone community, but the show does attempt to reflect the cosmopolitan transnational mix of most major North American urban centres in other characters (it's shot in Toronto), and the clones do represent a span of class diversity, and - within the limits of televisual femininity - gender diversity. (It would be great, although unlikely, if the show were to include a trans clone character). Both the performances (including the protagonist's Sarah's 'rehearsals' to take on the life of Beth) and the characters raise the question of what it means to look or act 'like' someone, drawing attention to the narrow bands of feminine performativity within given classes, ethnicities, and ages available in our media culture.

Pas de deux and Orphan Black share Canadianness, and I wonder if Canada's "Are we British? French? American? Indigenous? None of the above?" persistent cultural debate lends itself to this kind of imagining of multiplicity, whether utopian/romantic or dystopian. On the other hand, Orphan Black puts us firmly on the side of the clones, not their killer, and positively represents adoption and fostering as part of a familial continuum. And our focal character/clone is Sarah the grifter rather than Soccer Mom or Scientist. 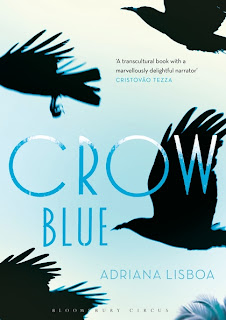 I thought of Sarah - an English woman with an Irish foster mother, having grown up in Toronto and moved around North America - when reading Adriana Lisboa's Crow Blue this weekend. Like Orphan Black, it's a story about alternative families, quests for identity, transnational migration, and the scope of the Americas. Unlike Orphan Black, it is rooted in historicity: the Communist guerrilla movement of the 1960s and 1970s in Brazil. The protagonist, Vanja, leaves Rio when her mother dies to look for her North American father. The trail is cold, so she stays in Colorado with her step-father, Fernando, whom she's never met, and whom her mother left before she was born. Along the way, she befriends Carlos, her Salvadorean next door neighbour, and meets friends of her mother's, June and Isabel, who are Zuni and Puerto Rican respectively, creating a rich sense of the blended cultures and diverse Latin@ and indigenous communities of the American South West. All the characters have fully-fleshed back stories about their transcultural identities and migratory routes. Like birds, they escape the borders of nationality.

It's this assorted group that sets out to find news of her father, Daniel, who turns out to be living in Ivory Coast (sorry for the spoiler, although it's not really). The wild-bunch quest, ranging over Colorado and into New Mexico, and chronicled by the older Vanja, is deeply reminiscent of a key text of North American identity formation: True Grit. The recent version by the Coen Brothers lends credence to Susan Faludi's argument in Terror Dreams about the centrality of the Western for American identity, particularly post-crisis. Faludi looks at The Searchers, but True Grit shares with the earlier novel/film the father-daughter relationship, and the search into Indian Territory.

Vanja isn't looking for her father's killer, and Fernando is not a deputy US Marshal - he's a public library security guard, and there's an attendant lack of "true grit" melodrama on their interstate journey. While the history of the American Civil War haunts True Grit (Cogburn and LeBoeuf served under different Confederate commands), it's the suppressed history of Brazil's actions against its Communist organisers that, through Fernando, forms the bedrock of Crow Blue's investigation of memory and identity. It's through storytelling that Fernando becomes a father to Vanja, and Vanja a daughter to Fernando, generating alternate versions of themselves, and a finely-judged, quietist ending (one that again echoes the end of True Grit, with Vanja resolutely single and in mourning) that leaves you pondering the infinitesimal decisions by which we all become, and the infinite possibilities we carry within us.

Perhaps nothing expresses that better than Maya Deren's film Meshes of the Afternoon - to which I can't help but feel that Teknolust is paying homage. Four Tildas = four Mayas; the computer (well, microwave - Leeson's pretty witty like that) screen = the window. Deren's search, like Orphan Black's, takes place in the maze of her own face and its multiple identities. Deren, like Vanja, is an emigrant to the United States, a Russian Jew who was a vocal Socialist at college, and whose husband, Alexander Hamid, had been chased out of Czechoslovakia for his left-wing journalism. They were making the film at a time of political turmoil and anti-immigrant feeling, just after the bombing of Pearl Harbor. Less than a hundred miles from the cottage where they shot the film, Japanese-Americans were being interned. "When Did Us Become I?" the film might ask of the divisive racism that Deren would have witnessed in 1943, as she had earlier as secretary to African-American Katherine Dunham. The film is a plea, like McLaren's and Lisboa's (jury's out on Orphan Black...), for plurality within the self and the state.

Posted by Delirium's Librarian at 3:08 pm