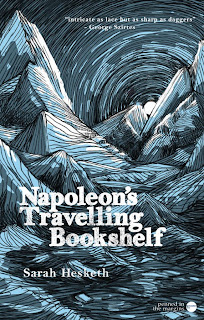 I've been engaged in my favourite form of work-avoidance, browsing poetry publishers' back catalogues -- in this case, Carcanet's, in order to take advantage of their 20% summer discount. Lots of titles caught my eye, but one -- Daniel Weissbort's Nietzsche's Attaché Case -- made me wonder if a new genre is emerging: poems and/or collections concerning the minutiae of the lives of famous men, the way in which these noted individuals accompanied and catalogued themselves.

Sarah Hesketh's Napoleon's Travelling Bookshelf -- published this month by the wonderful Penned in the Margins -- is not only concerned with the eminent, but it's full of curiosity as to how we catalogue, carry and discard our lives. The title poem finds Napoleon reading amidst Russian wastes, and others draw out similar moments of intense introspection and awareness against dramatic backgrounds: a mentally-ill woman struck by the "new necessity / of forever remembering the waltz" in "The Ballroom at West Riding Asylum" or friends "expecting the mutter of wings" in "Waiting for the Indiana Night Moth." Hesketh's poems often touch on moments of heightened expectation, rather than of loss or satisfaction, the moments in which we catch ourselves thinking, observe ourselves and commit the observation to memory. "Saturday Night Fly" and "Faking" both make this moment of awareness -- in the context of dressing up to go dancing, and negotiating with a lover -- glitter with specificity.

The poems themselves generate heightened expectations because of their precise and inventive titling, frequently conjuring images or whole narratives, from opener "Wild Boar of New York" to the final poem (and one of my favourites) "Suzanna Ibsen is cold." Wildness -- particularly of the snowy kind -- and femininity run quietly as themes through the book, culminating in a moving elegy for the playwright's wife that extends the genre (?) of wife poem pioneered by Carol Ann Duffy in The World's Wife.Suzanna echoes the characteristics of Ibsen's heroines -- "Ghosts / live in her bones" -- becoming an embodiment of his "large theatre-throat" in a subtle meditation on the relationship of literature to life. There's no bookshelf here where Ibsen catalogues his life -- except Suzanna herself (and her "rack of disappointment").

It's in this context of gathering that poems like "Green Song", "23 Kinds of Solitaire" and "Chaconne for Ice" fall into place. On their own, each seems like a workshop exercise working through shades, names and images. Offset by the wittily-named "The Year is 2095 and Bjorn is Planting Seeds from the Norwegian Ark," these poems of change-ringing become an enquiry into the human desire to collect, collate and preserve against an imagined future. Often, the poems appear to emerge from such acts of collecting that turn the poet's awareness to news stories, and their details, that the general reader might pass by as unimportant to the scope of history. "The Ladies of France Buy New Shoes" and "Warsaw Uprising" surface the small (and seemingly inconsequential) details of lived experience from overwhelming narrative of WWII. Poignancy is saved from mawkishness by Hesketh's ability to inhabit a real, defiant voice in each situation. Although the ladies of France walk with "the whole foot leaving the ground at once," they are grounded, earthy, worldly, and the Uprising comes to the reader in "the brack and the flail / of mudsuck and sewer-snipe."

These are ambitious -- in the sense of a large-minded writer with a strong sense of historical responsibility -- without being arrogant: it's their precision, but also their stance aslant. Hesketh gives a hint of her poetic manifesto in "Casting", which advocates not being the queen, but

the messenger
who will take the letter
that is always delivered too late.
Slipping scenes somewhere on the ship
to Norway. Lost from sight
behind the ice-mapped waves.


There's a glancing reference to Hamlet in that messenger on the ship, and therein to Eliot's Prufrock who pronounces himself "not Prince Hamlet, nor was meant to be; / Am an attendant lord, one that will do." So in the apparent stance askance is also declaration of intent. No walk on the beach here, but ice-mapped waves: a colder landscape, etched as copperplate. Hesketh is a fine poet, in the calligraphic sense, a poet of blade-like enjambment and almost aphoristic lines. This, from the end of "Lillith's Lament":

I taught my children several things:
never to roost where the apples grow;
never consent to lying below.

Posted by Delirium's Librarian at 3:26 pm