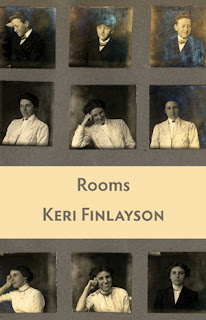 Keri Finlayson's Rooms opens with a poem titled "Cave Painting" that outlines (in charcoal) her project in the book: to explore a curious and productive tension, the relationship between language and image in human communication. The book will offer, promises the poem:

through a delicate interplay of histories -- personal, aesthetic, technological -- that set in motion the shadows on the wall.

But like Plato's analogy of the prisoners in the cave, Finlayson's work betrays an anxiety about language as a means of representation. The book begins with the statement that "before the beginning there were pictures," rooting the visual spectacle of cinema in cave painting, while language is "the gloss … the la la la … The going barbarian." It ends with poems arranged in crystalline forms suggestive of the atomic structures of silver nitrate and celluloid, the principle components of early film. Brittle, combustible and unstable, the material elements of cinema are paralleled with the fleeting and dangerous images that they captured chemically. Recounting, in various combinations, a fragmented sequence of remembered events, as if editing a film sequence, Finlayson measures how far words can approach not only the images recorded on film (which itself may be lost or faded) but -- more importantly -- those that happened off-camera.

The world of the book is that of Cornwall just after the First World War, of the fishing village where Finlayson's grandmother was born -- and where she was discovered by a silent film-maker who got her pregnant and deserted her in the care of her violent priest father. That is the primal scene that plays again and again through the book: with each poem, we drop a penny in the pier machine and watch again as the black-and-white (textual) figures perform their herky-jerky (e)motions. Fixed as/by melodrama as much as by silver nitrate, this all-too-familiar Griffiths-esque narrative of the kohl-eyed innocent is given - literally - texture through the verbal materiality of village life, with Finlayson's particular emphasis on fishing and on knitting (in "Knitfrocks"), giving the title of the poem in which the film-maker first sees his star -- "Casting" -- a triple sense. Inferring that film's techniques and traps are as old as cave painting, hook-baiting and "slip[ping] the knot" strips away its smoke-and-mirrors mystery, its celebrity. The poet also casts a weather eye over the cinema of the natural world, rooting film's chemical sheen in "Gorse, ore fed, suck[ing] up smelted quartz flecks as sap, / Fruiting copper flakes" ("Cornish").

Finlayson has a kenning way with her word-hoard, a love of alliterative play and of specific vocabularies, often layered over each other. This works to great effect in "Fine Cut" (The Sex Scene), where a deep knowledge of Cornish fauna is made strange through a Latinate vocabulary that transposes Church language into the Latin used for biology and geometry -- and sex, too, becomes a geometry. When she moves away from these specifics, from the tight patterning of words within a register and a line, Finlayson is prey to slightly clumsy generalisations like the line that ends the book: "We have the ability to burn." Given her delicate tracing of family history through the knotted shadows cast by village crafts and film's chemicals, Finlayson clearly has ability to burn when, like a film-maker, she keeps her (kino-)eye on the details.
Posted by Delirium's Librarian at 6:10 pm