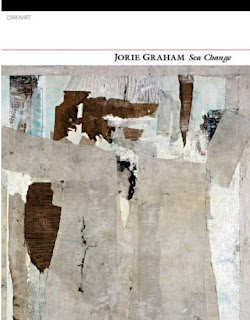 Ariel: Full fadom fiue thy Father lies,
Of his bones are Corrall made:
Those are pearles that were his eies,
Nothing of him that doth fade,
But doth suffer a Sea-change
Into something rich, & strange:
Sea-Nimphs hourly ring his knell.

Pulitzer Prize-winner. Successor to Seamus Heaney at Harvard. Regarded as hermetic, even mantic, Jorie Graham is a difficult poet to review. Investigating the "sea-change" of global ecological devastation (resulting, in turn, from "sea-changed" carbon) and the political sea-change after 9/11 in the US, Graham speaks with a voice of quiet assurance and devastating (literally, laying waste to vistas in her incredible feel for detail) observation that - echoing Shakespeare and the Psalms (and, in its cadences, the New York Times) - has an almost devotional quality. It's a difficult poetry to answer back. It's a poetry that pushes itself further through the repeated gesture of "& how," an exploratory -- even axcavatory -- development that draws the reader deeper into the mysteries.

Graham creates chinks in the poems with her frequent tactic of an assertion followed by "no", yet these confound the reader into further dumb awe y enhancing -- even staging -- her control of specificity. I found myself writing out phrases and stanzas in a rapture (not easy considering the intense length of her lines -- so long that Carcanet had to produce an unusually square book to accommodate them), reading poems three or four times, sometimes backwards. Some -- particularly in the middle section -- are legible and lovely lyrics about ageing, seasons, and intimacy. But the breadth and density of her poetry is like that of the oceans. Rather than leading me to coherence, to an essay, her poetry makes me want to revel in it, to swim and dive and splash.

So here are some watermarks from my reading -- partial and scattered. I imagine reading this book again and again -- and feel almost shy of asserting to cohesive a reading. I want to hold onto the white space that striates the pages.
How does Graham's book concern itself with The Tempest? It's poetry as oceanography. It pairs the sea and death, counterpointing the constancy of death with the sea's mutability. It's concerned with the magic of making -- especially the late magic of Prospero's final speech -- and "this inch of finishing." But Prospero is also "the torturer" (and the poet Ariel) in "This," which speaks of "the sound of / servants not being / set free". And the torturer is Bush -- especially in the extraordinarily angry "Guantánamo" and in the spine-tingling "Full Fathom":

those were houses that are his eyes— those were lives that
are his
eyes—those are families those are privacies, those are details—those are reparation
agreements, summary
judgements, those are multiplications
on the face of the earth that are—those are the forests, the coal seams, the
carbon sinks that are his—
as they turn into carbon sources—his—

. Those "eyes" are also Graham's interrogation of the lyric I (and the personal I that is attacked, and dismantled, by torture), equalled by her savage and direct invocation of Bush, the torturer, as "you" in "Guantánamo."

Sea Change recognises very directly, in the stretch and elasticity of its long-line poetics, that Guantánamo, climate change and the credit crunch come from the same monolithic (and monotheistic) neo-conservative mindset. "Futures" and "Loan" use the poetic economy of repetition to essay/assay the way in which the "this / message 'I'", money and water all depend on circulation (and are eroded by exploitation). The book is predicated on a moment of crisis that is personal (ageing), political (the US' loss of credibility under Bush), ecological -- and linguistic, concerned with the redaction and devaluation of language under the Bush government and in the era of texting. Sample from "Futures":

I your speck tremble remembering money

where "speck" suggests "speculation" -- the act of imagination itself reduced to mean monetary mind-games -- and further to a mote in the eye/I that produces the tears that flow through the poem:

"Just Before" torques speculation further (or in reverse) to present a speculative poetry: "a pool. Of / stillness" opens out into a science-fiction in which

... there was no standing army anywhere,
& the sleeping bodies in the doorways in all
the cities of
what was then
just planet earth
were lifted up out of their sleeping
bags, & they walked
away, & the sensation of empire blew off the link
like pollen—just like that

The words are short, simple, plangent but the vision they offer is expansive, utterly original. This is science fiction that is "far from un- / earthly, it was full of earth." Immanence is one of the big themes of the book, delinking the maker from any grand Maker. And on the subject of making, Graham is constantly pressing and examining the act of writing and the status of poetic language.

In "Loan," thinking about how poetry uses the world, she writes: "all this taking is not our taking", asserting that poetry is exactly the work of circulation, of giving and returning, rather than keeping (or more, accruing) meaning. Similarly, "Loan" reminds us that

irrigation returns only as history, a thing made of text,
& yet, listen,
there was
rain, then the swift interval before evaporation, & the stillness
of brimming,

Despite the long lines and the many vocabularies, this is a poetry that seems to aspire towards something beyond words, or at least beyond their accumulative nature and economics of meaning. In "Day Off", Graham foresees

the day of
days, where all you have named is finally shunted aside, the whole material man-
ifestation of so-called definitions, imagine
that, the path of least resistance wherein I grab onto the immaterial and christen it
thus and thus &
something over our shoulders says it is good, yes, go on, go on, and we did.

There's the echo of Molly Bloom's soliloquy and of Beckett in that final line that takes up the play on "day of/f judgement" to suggest an ending as release from meaning rather than entry into it.

That turn is encoded from the first poem of the book "Sea Change," which exhibits two of the recurring tropes in the book: Graham's hyphenation of and caesura on "in-" and her exact use of the ampersand. The former allows her to invent words such as "in-clingings" and query words such as "in- / dispensable," asking what the inwardness -- or inversion -- of each might be, and how internality and refusal/reversal might be related. The ampersand is curioser, littering the page like a Celtic loveknot, at once less and more than the word "and": it opens up the word that links "rich and strange" to suggest we might, culturally, delink them. It asks us to sea-change its knotted notation into and out of language.
Posted by Delirium's Librarian at 7:40 pm