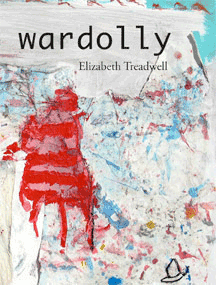 Elizabeth Treadwell's fifth full-length collection, wardolly (chax, 2008), comes on like the Ritalin-addicted younger sister of Juliana Spahr's thisconnectionofeveryonewithlungs. "Very unfair, lady butchery —" might be Treadwell's response to that -- and indeed, the poems defy easy quotation and analysis. Engaged with the randomness of information in the hyper-density of contemporary media and urban space, her poetry takes a buffalo stance amped up by femme-inist electroclash ("A Thousand Virgins Shout Fuck Off" -- note to Christina Aguilera/Le Tigre: this is the first single for your album!).

It's doll-poetry the way Hans Bellmer's work is doll-art - twisted deep play with the structures of bodies, minds and sentences that undoes, by doing, the fucked-up twists of the military-political complex. Dolls, like poems, are miniaturisations, representations perfectly rendered, at once sweet and sinister (that extra -y on wardolly recalling Nabokov's economic Lolly as well as the dolly used to move the cameras now embedded with troops). Dolls are not your brother's war toys, GI Joe excepted -- frilly and pink, Treadwell's dollies are unashamedly female, laying out la ville in haphazard urban blazons wherein Central Park is seen (critically) as New York's "Hooch." Her flanerie, with its disavowals ("she did not know the parts of the city") and coinages ("witcharms from the wastelands", both from "Mars & Orchard") suggest Abigail Child cutting-up Frank O'Hara.

Like Bellmer, Treadwell is fascinated by parts and what hinges them together/takes them apart. Rather than the conjunctive and conservative forces of traditional lyric and narrative, Treadwell takes up urban connections: using lists and indices, the poems in Vespers are at once the phone book and Lombroso's criminal catalogues. But there are no hierarchies here, and no moral judgements: in her generative language of the mundane and the surreal, Treadwell undoes the eugenics of description by which lyric values one moment, object or word over another. The city and the list fall over each other as sites of repetition and the uncanny in "(The city of horror)", a terrifying illustration of the capitalist war machine's reductio ad absurdum; the titular parentheses at once suggest the aversion of eyes and our compulsion to look as the phrase is repeated ten times, at the start of ten lines.

That determination to look - and look widely, with the fixed and seemingly flat eyes of the wardolly - acts to re-mean "Animation" as life-force, not corporate product: this is poetry that wants "more than gritty blobs." That liveliness is underlined by a poem that isn't a poem, the "Notes to several of the poems," which collates and recalls quotations from across the text. Elisabeth of Schonau, Anita Loos, Kim TallBear, Francoise Barret-Ducrocq, Aphra Behn, Etel Adnan, Eileen Myles, Camille Roy, Gertrude Stein and others join the doll army Treadwell is marshalling.
Posted by Delirium's Librarian at 5:24 pm