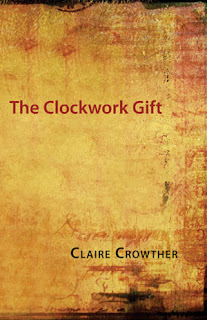 Maybe it's something about getting sucked into watching Wimbledon -- the way the regular thwack-and-forth of the ball somehow eats up the minutes and hours, the way that Centre Court acts like a giant sundial with that L-shaped shadow eating up the late afternoon -- but I want to write tonight about time as (a) present in Claire Crowther's The Clockwork Gift.

Not one to maunder about wearing a purple hat, Crowther turns a weather eye on women and ageing in her second collection. In poems that are at once metronomic in their deft rhythms and syncopated in their tripwire vocabulary and image-making, Crowther presents a paradoxical vision of the clockwork gift: that the passage of time brings with it both repetition and entropy, with seasonal cyclicity as the balance between.

The poems bloom not with polite garden flowers, but ruins, rust and inflorescence -- all treated lovingly, disinterestedly, rather than as an Iain Sinclair-esque baroque of disintegration. The book's various careful, and often witty, approaches to age remind me of Agnès Varda's wonderful documentary about what's thrown away and the people who retrieve it, Les glaneurs et la glaneuse. The lucite clock without hands that Varda keeps on her mantelpiece, and which she cuts to after a shot of her ageing hands, might stand as talisman for Crowther's recovery of the discarded, the way that she sets decay back into the natural cycle.

That's a radical move against our current cultural fear and exclusion of that which ages. She finds in age exactly the glow produced by late blooming, the fire of energies that have been banked and are flaring up. Of her grandmother she writes:

She would have been in her element, arc-lit

in gold water, being filmed on stage
reading poems about sun, flanked by flowers,
her face a gleam of all her profiles projected
at once...

No skull but a newly-coined queen.

That which is devalued is "newly-coined" in a luminous account of memory and inheritance. It's a triumphant conclusion to the poem "The Herebefore," a title that suggests some of Crowther's subtle play with time, memory and age as cultural -- and specifically narrative -- constructions. This is most acute in a startling central sequence, "St. Anne's Apocrypha" that brings St. Anne and St. Joachim into the twenty-first century, with Joachim coaching a team of elementary particles and Mary having acupuncture, hinting at contemporary tales of older mothers conceiving by IVF and (in Joachim's Kaons and Pions) the scientific redefinition of the miraculous.

More playfully but equally astute, "Unexpected Goal" finds "St George / overlooking a grey-haired woman striker playing / with a boy among bikes left where they fell, mid-roar." The overlooked (in its dual sense) among the abandoned, the striker and the roaring -- it's a juxtaposition that gets at the uncanny fear and fascination of another game invoked in "Street Football," that of Grandmother Wolf. Crowther is and isn't the wolf in grandmother's clothing: hungry for language and its scenes, she essays an appetitive poetry that is inspiring in its openness, its generosity in giving time -- and its effects -- to the reader.
Posted by Delirium's Librarian at 11:53 pm