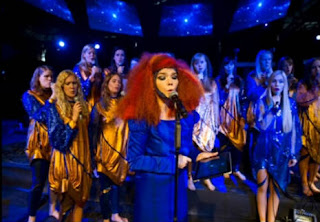 Welcome to another in this summer's irregular series of posts on women and live music performance. This one was prompted by a review of Bjork's show Biophilia that appeared on the F-Word. I saw the same show, on the same steamily humid day. Like Ruth Rosselson, I felt disappointed at first: distanced by the performance in the round framed by screen media (I found the videos inventive and distracting), music engines (likewise), the avenging angels of the choir (likewise and more so), and the Victorian architecture, which made me feel like I was at a cattle auction in a Hardy novel.

Which made me wonder: what exactly is it we're buying at live performances? Rosselson's review points out that the performance in the round meant that Bjork was facing away from 3/4 of the audience at any given moment, a gesture compounded or highlighted by her Braveheart/Boudicca-style wig and make-up. Like Rosselson, I found myself longing for face time: that intimate connection that seems promised by the yearning, direct, bodily intensity of Bjork's music. That faciality is the key mode of Western culture is a truth widely recognised, particularly in contrast to the place of the face in relation to identity in Islamic cultures. I found myself somewhat chastened to realise that what I was bidding for in my shuffling, head-winding position on the elevated terraces of the market hall was a chance to "own" a moment of Bjork's face, to "own" a direct connection with the singer/performer, as if she were singing directly to me.

That seduction is of course the predicate of musical and theatrical performance dating back at least to the eighteenth century and the appearance of women on stage in England in the Restoration: precariously paid and in social limbo, female performers were often perceived as prostitutes "offering" themselves on stage and off. That association, which was sometimes literalised under economic and social pressure, still haunts the presence of the female performer and the desire of the audience.

What's particularly interesting to me about Bjork's music -- and particular her new material -- is that, in all sorts of subtle ways, it plays with this desire and the idea of the face. David Attenborough's pre-recorded announcements -- brisk, associative, three-word captions -- couldn't be more different from his precise but flowing narration for BBC wildlife documentaries. Rather than naming and narrating species as they appear on screen (and particularly, with mammals, as their binocular vision engages ours), these captions present the theory or theme of the track that follows as an experiment rather than a confession.

Eye contact is a powerful experience, not only with a non-human Other whose eyes appear to offer recognition and reflect intelligence. It's one that shapes us from infancy in the maternal dyad, and one that can offer a guarantee of our existence and value in adulthood: but it is far from definitive. A partially-sighted person could have thrilled to the varied and palpable sound world of Biophilia, not least the absolute commitment of Bjork's voice to fill the space and engage her audience.

The video screens above the stage act as a reminder that confession is now (is always?) a mediated act, and our expectations of face time are not a nostalgia for an organic age of close connection with performers, but rather a product of cinematic technology, specifically the close-up and the video diary, which create the sense of public ownership over performers that generates paparazzi (Bjork has little patience with them as a species).

In place of this false nostalgia/claim to faciality, Bjork's new show offers a radical idea: biophilia. Love that relates to the life in liveness, not to appearance. The liveness of the voice as expression of embodiment, rather than the face. Of movement and co-operation (as when Bjork was surrounded by the choir as a mass of bodies) rather than the singular artist selling face time. Its radicalism stretches far beyond the commercial music business or issues of celebrity to speak to how we construct our relations with every aspect of the biosphere. Do we need eye contact with every refugee in order to protest draconian immigration regulations? Will we not save endangered animals unless we can have face time with them (every Friday, as per WWF's facebook stream)? Must something _have_ a face for us to engage with it -- to believe it is engaging with/imploring us?

Or can we read Bjork's costume and staging as a plea for escape from faciality: for returning the (pathless, faceless) rock to rock music?
Posted by Delirium's Librarian at 1:16 pm