What Can a Library Do? 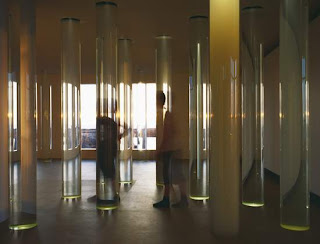 Examined Life is an attempt to show that philosophy is part of everyday life, that it has something to say about walking, shopping, listening to music, throwing away garbage and, er, boating in Central Park. Director Astra Taylor points out early on, in conversation with philosopher Avital Ronell, that philosophy is usually done in books, where an argument can unroll over 300 pages and hours or days of the reader's thought-time. So, in a sense, the film is a spoken library, embodied and kinetic and discursive: a library for the era of the Twitter attention-span, some might say, or an insightful return to orature and face-to-face communication as the transmission of thought and feeling.

I feel both: I love books -- especially long books -- but since finishing my Ph.D. I've come to wrestle with the fetishisation of footnotes and cross-referencing and polysyllabic jargon. No-one in the film talks much about books and their importance to an examined life (Cornel West gives a brilliant jazz soliloquy on the centrality of music to his examination of life) -- only one person apart from Taylor even mentions books (rather than quoting from them): Sunaura Taylor, an Oakland-based artist and disability activist who walks through the Mission District in conversation with Judith Butler, who raises Gilles Deleuze's question "what can a body do?" as a productive way of thinking about embodiment without barriers or definitions. Thinking about how she has been defined by what others perceive her as not being able to do, Taylor comments that she was alerted to the systemic oppression of disabled people by reading a book review -- although she doesn't say what book.

But the film made me think (among many other thoughts) that libraries do not just contain books -- not only in the sense that they now contain CDs, DVDs, computers, but that they have always contained bodies, at the very least the body of the librarian. We are fascinated, culturally, by what bodies do in libraries: generally what they cease doing, given the extensive genre of murders in libraries. The Dr. Who episode "Silence in the Library" gets at the reason why, encapsulated in its title: libraries *are* a kind of death, with the containment of knowledge paralleled in the silence that living, breathing bodies are supposed to assume.

It's that deathliness that haunts Roni Horn's installation in Stykkisholmur: Vatnasafn, the Library of Water, consists of twenty-four glass pillars filled with water sourced from twenty-four of Iceland's shrinking glaciers. Early viewers describe the water as being cloudy, opaque, vari-coloured, but now it's clear, the sediment having settled to the bottom of each pillar and glowing in various shades of gold refracted from the dun-coloured floor. The pillars are grouped almost like readers standing at shelves: the room in which they stand was the town's library, now fitted with huge windows that reflect in the pillars creating optical illusions and miniature cinemas of Iceland's changing weather.

The room is intensely beautiful but also sad, reminiscent of a laboratory test for water purity or the Arctic Seed Vault.That is, after all, one of the functions of libraries: to announce imminent death and loss through the work of preservation (hard not to hear the echo of conservative in conservation). One day the library may contain all that's left of Iceland's glaciers, filed neatly by location and surrounded by words for the weather that may have been altered beyond recognition -- no more hly.

This library isn't entirely without books -- there are copies of some of Horn's books and catalogues for browsing -- and it is populated, like a lot of Horn's art, by words, here scattered on the floor in tone-on-tone rubber (which, when scuffed by the rubber soles of the slippers you have to wear to avoid tracking weather onto the floor, gives off a properly Icelandic sulphurous scent). For Horn, words speak insistently of the body: on the floor she has cast, rune-like, a demotic meteorological vocabulary that, as she points out, doubles as a language of feeling: moist, sweaty, dull. So these words are also bodies, ghostly readers (of weather as well as/doubling as books), falling at the feet of the readers who still clamber up the hill and see themselves disappear and distort in the columns.

Which reminds me of a line from the Ani Difranco song "Reckoning": "the funhouse mirrors of your fears." Because reflected in the Library what I saw were my own anxieties (intensified by reading Dreamland) and our cultural anxieties, which is also a function of the library: not just to store knowledge, but to organise it in order to reflect and inflect -- to lead us to an examined life. In the film, Cornel West talks unabashedly about the almost-excessive exhilaration of the encounter in the library with a book *as if* with another person. There's something of that in Horn's Library as well (and in all of her work), that exhilaration of meeting yourself as a water spirit, as a manifestation of weather, as not there, insignificant in the timescale that forged and moved glaciers, tiny compared to the racing clouds.

So why, amidst the exhilaration that reminds me what a library can do -- that it doesn't just file books no-one wants to read, but creates the possibility of a mind-expanding, time-bending encounter -- did I feel so sad? Perhaps because I was also reading Susan Sontag's The Volcano Lover (I never have fewer than two books in my bag when taking long bus journeys, just in case) and something about the installation made me think of a photograph I saw in the exhibition of Annie Leibovitz' work at the National Portrait Gallery. It show Sontag in the National Library in Sarajevo in the early 90s: she is sitting on a pile of books and rubble amidst other piles and devastating, dramatic shafts of light falling through the lack of a ceiling. In the frankness of Sontag's gaze there's nothing of TS Eliot's shoring up the ruins (a line she quotes in the novel), but there's something profoundly shocking about seeing Sontag, arch-priestess of high culture, sitting amidst its quite literal ruins.

But even full of rubble, the library is still patently a library, and a familiar image in itself, one in a long line of ruined libraries stretching from Alexandria to Iraq. Part of what it does is to sort, store and conserve the chaos of its own ruin. Who doesn't have nightmares about all their books burning or getting soaked or even just falling off the shelves and becoming hopelessly disordered? As Sontag describes in The Volcano Lover, the collector wants to impose order on a chaotic world: the library is a communal extension of that. The exhilaration comes both from order and the potential of disorder, from preservation and the chance of loss, from the encounter and its disappearance into silence: the paradox of glacial water, a solid represented by its liquefied form.
Posted by Delirium's Librarian at 11:38 pm