I've been humming Natalie Merchant's "Ophelia" to myself on and off for months, so it's not surprising that I picked up Lisa Klein's novel Ophelia at the library on Monday.

I devoured it in a day, as blogger Lizbee suggests, and liked many aspects of its historical consciousness, particularly the idea that skull-obsessed Hamlet was on his way to Padua to study anatomy with Vesalius when his father died. Klein sets the story of the play between 1585 and 1602 -- that is, during Shakespeare's lifetime rather than in the time of the original Hamlet legend (before 1200, when Saxo Grammaticus recorded it), which gives Klein more scope to imagine Ophelia as the kind of heroine all YA historical novels must have: feisty (yet sexy), feminist (yet boy-crazy), educated (yet ill-informed about pregnancy), courageous (with a soupçon of fainting). Klein's Ophelia reads Margaret of Navarre's Heptameron, learns herbalism, resents her brother's education, avoids rape by Edmund, [spoiler] fakes her own death and does, indeed, get her to a nunnery.

Klein, who teaches Shakespeare (I'm guessing this from the acknowledgements), salts her retelling with dozens of Shakespearean -- or rather, Shakespeare in Love-ean -- devices, such as cross-dressing (all the comedies) and a fake death (Cymbeline). But the book is at its best when it takes an imaginative leap far from Shakespeare and stops trying to cram in every clever reference to the play, in the final section detailing Ophelia's life at the convent, where she meets a St. Teresa-style mystic, negotiates life among a society of women, conceals her pregnancy and faces down a bishop. Her path through doubt and faith is more convincingly of its time than her feisty arguments for equality, although possibly less captivating to a contemporary reader.

Celia Rees makes a better attempt at a similar project in Sovay. 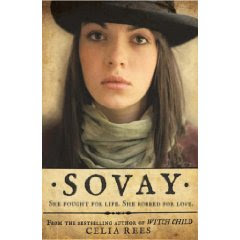 Like Klein, Rees begins with a pre-existing text, a traditional English ballad about a young woman who dresses up as a highwayman to see if the rumours of her beloved's unfaithfulness are to be believed. She stops his coach and demands the ring that was her gift, and when he refuses, knows that he's been true. Rees gives us the ballad tale in the first chapter (Sovay's betrothed, James, is more of a cad than the ballad Sovay's lover) and wonders what would happen next to a girl with that kind of courage and wildness. Taking the story out of ballad-time, Rees makes excellent use of her late eighteenth-century setting, quickly getting Sovay embroiled in the panic over the French Revolution. There are well-researched references to experimental science (Joseph Priestly), the American War of Independence, slavery, molly houses, transportation to Australia, period fashions and a judicious use of eighteenth-century fictional style.

Sovay has more compass in which to move than Ophelia, even though both of them try on male clothing for protection, freedom and anonymity. Springing from a ballad, she has no character attached apart from her fondness for "stand and deliver," and Rees' choice of era is well-matched to her fictional style, which echoes everything from Fielding to The Scarlet Pimpernel, whereas Klein's novel never quite disguises -- or works with -- its dual origin in folk tale and play. Sovay's nascent feminism is more credible than Ophelia's, given the republicanism she encounters among the supporters of the French Revolution (although it's surprising she doesn't mention Mary Wollenstonecraft's A Vindication of the Rights of Women, published six years before the novel opens), and her adventure has a more defined form, full of allusions to Gothic novels of the period. Rees gets a bit ensnarled in the Illuminati (it's never a good sign when they show up, frankly, and they semi-wreck Rees' bewilderingly complex The Stone Testament as well) towards the end of Act II, but switches tack to a fantastic portrayal of the final days of the Terror in Paris (which was more credible yet less expository than Sally Gardner's The Red Necklace) that ends all too soon with reader, she married him [no spoiler on which of her many suitors she chooses!] Perhaps a second Sovay novel is in the offing?

It was a non-sequel that thrilled me most in my week of literary heroines. After Powers, the third book in Ursula Le Guin's Annals of the Western Shore series, I was all revved up for the fourth (and final?) installment. Instead there appeared Lavinia, a novel about a minor character (and I mean minor, she gets maybe three lines) from Virgil's Aeneid, the dullest of all the epics.

Not only that, but Lavinia's main role is to be the silent bride traded to Aeneas and mother of Rome. Yawn. But Le Guin is nothing short of a genius: as well as a detailed historical imagining of early Latium, Le Guin allows her character to take on the conundrum of being a bit player in a national myth, the slip of a poet's pen as he struggled to finish his epic. Lavinia meets -- and debates with -- the spirit of the dying Virgil at the local shrine, learning her fate both within the poem (to marry Aeneas) and in history (to be a fictional character). It's reminiscent of Christa Wolf's Medea, which begins with the novelist describing her own trip to Mycenae.

It sounds like a postmodern narrative game, which it is, but the stakes here are incredibly high: the nature of narrative itself, and particularly the role of women in much of the canon, there to provide a foil, cover or bosom for the hero. Aware of her fictionality, Lavinia nonetheless -- or perhaps even more -- relishes the materiality of her life in Latium, from the texture of lamb fleece to the scars on her husband's thighs. The richness of Lavinia's world is that which, Le Guin suggests, eluded Virgil in his focus on Aeneas, who is himself focused on his destiny. Domestic life, ritual duties, sex, friendship, hard work: these are all described with Le Guinian good sense and humour, and her telling eye for the small details that shape a culture. That's why (and I'm loathe to say this) I'm not sure that the somewhat mystical ending works. While it follows the unfinished nature of the Aeneid, it feels like a withdrawal -- not a cop-out, exactly, nor a failure, either, because it gives me chills. But a question.

Perhaps the ghostliness of the un-ending in which [spoiler] Lavinia turns into the owl that haunts the woods of Latium and flies over present Italy, which is almost impossible to imagine and yet so vivid, makes visible the chilling realisation that fictional characters do not have a life beyond the final page except what we choose to give them. Le Guin has always had a gift for unsettling the status quo, asking charmingly difficult questions about everything from pronouns to political agency (which are, of course, connected) through her carefully wrought fictions, but Lavinia is the most thorough and unsettling investigation of the nature of storytelling itself. She may not make Lavinia a circus girl or a bluestockinged suffragette, but she raises, profoundly, the question of what Lavinia -- or Ophelia, or Sovay, or even Ged -- can ever be.
Posted by Delirium's Librarian at 10:09 pm