Paranoia in Translation, or Lisbeth Salander in the Land of Green Plums

Actually, this post could equally be called Schizophrenia in Translation: the sensation that derives from reading two (very different) books concurrently to the point that they seem, if not to merge, then to be deeply intertwined (litzophrenia?). Not that I'm looking to make light of mental illness by using terms like paranoia and schizophrenia out of context, but sometimes an encounter with a book will remind me what a weird process reading actually is -- that sitting silently over some marks on woodpulp, muttering and laughing to oneself while entering into a fantastical world and often into the persona of an invented person, is a pretty wacky thing to do.

It's hard to stand outside reading as an activity: I've been doing it since literally before I can remember anything else. One of my first and only toddler memories is of putting together the blobs on a flashcard into a word. Après ça, there was no stopping me: by the time I was in infant school, I was teaching the other kids to read. I think my mindbrain has probably been so shaped by reading that it's what I am in the same way that Usain Bolt's musculature and neurons have been sculpted by running. Culturally, reading has pretty much set in for the long haul. We all (84% of UK 16-65 year olds in the UK have literacy at GCSE grade G or above) do it inadvertently from the cereal box to the end credits every day, and many of us do it advertently (a word? And if not, why not?) most days as well.

Maybe it's because I've been hitting the poetry like a poetaholic (with events at PoetryFilm and at Keats House for Brittle Star, and reviews due to Staple) that I contracted reading-dissociation when I switched back to novels -- and a big fat novel at that, purchased especially for a weekend of train journeys and a solo hotel stay. I'm hardly the first person to be bowled over by Stieg Larsson's The Girl with the Dragon Tattoo (an established fact, since half the people at PEN have been telling me to read it for at least a year), but I might be one of the least likely. After (because of? despite?) a brief (and disturbing) devotion to the work of Andrew Vacchs when I was about sixteen, and an obsessive interest in Twin Peaks and The X Files, I have never been much for thrillers, either in codex or on celluloid.

Both my parents were big with the mysteries, 'tec series and all things investigative, but my love of noir begins and mostly ends with Laura (a major influence on Twin Peaks). That's right: I don't have the hots for Hitchcock, and I've no remorse for yawning at Morse. It's a failing, I think, as a reader, to exclude a genre from your library, but Delirium's mystery/thriller shelf is entirely reserved for the splendid Sherlock Holmes, a detective I encountered almost as early as I began reading (those shadowy semi-memories of The Hound of the Baskervilles starring Basil Rathbone as Holmes still give me nightmares). I've tried Rebus and Whimsy and Wallander and Dirk Gently, and no-one has ever come close to the idiosyncracy and intellect, the conviction and addiction, of Holmes (especially Jeremy Brett in the role).

But I have to confess: Lisbeth Salander, the eponymous "girl with the dragon tattoo" comes close. Despite Larsson's info-dumping, despite the financial shenanigans that make as much sense to me as Ikea self-assembly diagrams, even despite the relentless snö (and equally persistent mosquitös) that falls on all Scandi detectives, I found myself hooked until 3 am, reading with the covers drawn up to my chin -- except when I leapt out of bed to check the door was locked. 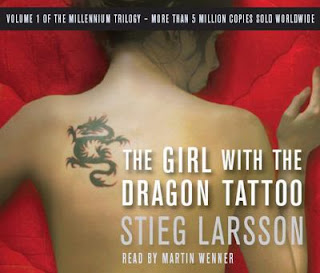 I couldn't sleep until I finished the book, and then I couldn't sleep some more. If my bag hadn't been full with a print-out of my own novel (which I'd promised myself I'd edit on the train home, come hell or inconveniently located rabbis), I would have bought The Girl Who Played With Fire in WH Smith's in Manchester Piccadilly station that very morning (possibly even before breakfast at the excellent Koffee Pot).

Because here's the thing: I don't read thrillers because they *get* me. Rewatching The X Files (series 1-3 1/2) recently, I found myself almost choking on my fingernails even in episodes that I'd seen half-a-dozen times before. I suffer from what's known in my household as "narrative tension." Hell, I couldn't even watch Sense and Sensibility at the cinema without getting fahrklempt about whether Marianne would see that Alan Rickman, I mean Colonel Brandon, was infinitely superior to stupid-haired Willoughby. And I'd read the book only six months previously (I also clearly have an appallingly lax narrative memory). I'm like the goldfish in Ani Difranco's song for whom the little plastic castle / is a surprise every time. Or a terrifying shock.

It's not so much about guessing whodunit as worrying in every fibre of my being about who's going to be next and what horrible defilement will be described. Worrying, I suppose, that I'll be next. Larsson's thrillers fit very much in grim miserablist realism tradition of writers like Ian Rankin where a city like this harbours people like you living next door to psychos like him. Not so much plausible deniability as undeniable plausibility. Larsson's obsession with Ikea furniture may be a running footnote on the commercialisation of Scandi design, but it's also an arrow pointing at our own living rooms (and particularly at the Swedish airport minimalism of the hotel room where I was holed up). What with financial crashes, banker bonuses and inter-generational sexual abuse, Dragon Tattoo felt like reportage as much as fiction -- and who doesn't feel tense thinking about how the house of cards (economic, political, environmental) is about to crash down on us?

Despite the expertly-generated tension, the novel lacked two aspects that mar most thrillers for me: punitive manipulation of reader expectations (and of vulnerable female characters), and stupidity dressed up as fearlessness (goading the reader to follow the investigative character into the darkness). It also lacked any sympathy for, or glamorisation of, the killer(s), and in a way any curiosity about them. They were dead space, plausibly drawn characters exerting zero narrative fascination rather than the devilish figure who haunts so many contemporary thrillers. Coupled to that lack of interest is an abiding, energising fascination with -- and fury about -- the systems of fear that make possible sexual abuse and murder, and the silence surrounding them. Industry, politics, the law, the family, the state: these are the real abusers in Larsson's books, the facilitators who empower the bit-part players who carry out the social will, whom Salander fights against with every sinewy ounce of her 4"11 being (Kate Mosse made the point well in a Guardian review entitled (although it's lost its title online) The Man Who Liked Women). I've never encountered a mainstream fictional work that lays out as clearly the effects of state power, in particular its impact on those considered less than full agents of the state: women, children, those with (perceived or actual) disabilities, those who dissent.

OK, Larsson was no Herta Müller and contemporary Sweden is not Communist Romania, but I can't help feeling that their books have something in common -- and not just because I've been reading The Land of Green Plums this weekend as well (props to Haringey Libraries, incidentally, for having a copy of the Nobel prize-winner's book, which is incidentally out of print). 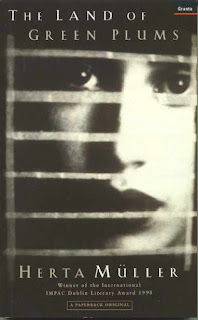 It's a book so powerful that I had to return it to the library the minute I finished reading it: not just because I wanted other people to have the chance to read it, but because it felt dangerous to be carrying it, as if it were one of the banned books that the characters hide in the summer house. Or even as if it might infect me with the green plum-death or cancerous nut or the dream of the sack that variously afflict characters. It's an extremely calm nightmare of a book, where the narrative tension happens on a word-by-word level, as if the novel is in code. There's no secret who the bad guy is (the state and its agents) even as the protagonist investigates every detail of her life exhaustively to find it/him out, but almost any character could be a spy, even Elsa the white cat, creating an extraordinary atmosphere of anxiety, as in the novels of Ismail Kadare (although unlike Kadare, Müller does not see women's genitalia as both the salvation and betrayal of every man).

In both books (both of which are, of course, in translation, by Reg Keeland and Michael Hofmann repectively), the tense mood of the thriller and the anxiety of the reader act as political critiques, engendering the desire for relief through change. In both, the female protagonist is almost unbearably unknowable, courageously unpredictable, and hyper-alert to the tentacular enemy with which she battles. Or maybe I'm just hyper-alert to their similarities after my weekend of sleepless paranoia, and hyper-alert too to the possibilities of thrillers to challenge my thinking, and experimental novels to have me on the edge of my seat.
Posted by Delirium's Librarian at 10:34 pm