Scattering Largesse, or, On the Abundance of New Victorian YA Novels

It must be nearly Xmas, because my mind is full of words like gaslamp, orphanage and tippet, the Victoriana of a clammy, fogbound English winter evening offset by a roaring fire, oranges in stockings, reading aloud, white-nightdressed children saying their prayers to smiling maidservants, and -- oh wait, that's a BBC fantasy world. Dickens has a lot to answer for; or rather, the cosily familiar bewhiskered chap that we've made of him and his rosy-cheeked, cheery orphans. Which is unfathomable, given how grim the subject matter of his books really is. Somehow even grinding poverty and tuberculosis look glamorous on TV, and all the social campaigning becomes just a pebble in the story's shoe. Maybe that's "universal appeal" or maybe it's dumbing down, but what I remember most about reading Dickens as a kid (another example of UA/DD) is that his stories awakened a profound sense of injustice that no happy ending could set aright. So Oliver found a family, but what about all the other orphans?

*All* the other orphans. All that Victorian and Edwardian improving kids' lit was full of Oliver Twists and Jane Eyres: Tom the chimney sweep and Huck Finn the runaway; Rebecca and Anne, the feisty adoptees; Frances Hodgson Burnett's Sara Crewe and Mary Lennox, orphaned by India. Each of them offers the same fantasy for young readers, I think: of escaping one's family to have adventures (boarding school novels offer this in miniature) and being reunited with them at the end. A version of Freud's fort-da game. It is pretty strange, though, that children would love books about being bereft or abandoned: think of Peter Pan. Families, particularly the Victorian-Edwardian middle-class family, come across as stultifying and oppressive places from which one must fly, often in order to form an alternative family, first of friends (the Artful Dodger's gang, the girls at school) and then with more generous parental figures. That's why the end of Huck Finn is so disquieting: there's no sense that Huck's lot in life has been improved, no learning and growing. 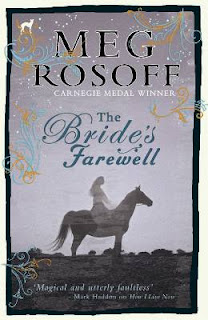 And that disquiet also marks the end of Meg Rosoff's The Bride's Farewell, a hauntingly strange book that sticks in the corners of my memory. Mary Hoffman points out that Rosoff's fourth novel "has been widely compared with Hardy," whose grimness exceeds even Dickens', especially when it comes to the oppressive, hypocritical and fissive nature of the nuclear family. Pell, the main character, is an elective orphan: she runs away from what, in any other cod-Victorian novel, would be the blissful conclusion, "Reader, I married him." Not Pell. She leaves behind the dim but persistent farm boy who has pressured her into a practical marriage that will keep her bound to her chaotic family, and takes her slightly supernatural awareness of horses and her lean strength on the road to look for work. Like many heroines of recent historical YA novels (as I've discussed elsewhere), Pell dresses as a boy for protection, although Rosoff -- who created Finn, a brilliant trans character, in What I Was -- plays hintingly with the eroticism and politics of transvestism, whereas in other novels it's an ornamentation that proves the heroine's un-girly bravery.

Bookwitch has said that she feels that Rosoff's female protagonists are more convincing than her male protagonists. I wonder if that's because bold girls are more plausible and welcome today than dreamy, passive boys. What Rosoff's protagonists have in common, across gender, is that they often verge on disappearance through disguise: Daisy, in How I Live Now, is starving herself into absence, while the narrator of What I Was slips out of school as often as possible to avoid bullying, and becomes almost invisible. Pell is no different, losing herself first in the myth of her anonymous boyhood and then almost in the earth itself as she searches for her lost brother. Pell is an awesome creation, and her coming to self is a genuine unfolding, even though as readers we spend most of the book in her perspective. There are choices that Pell makes -- and turns the story takes -- that I find mysterious, even after a few reads. Pell is what Tove Jansson might call a "true deceiver," honest and straightforward to the point that she tumbles headlong into depths. 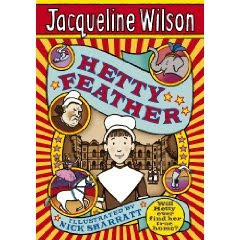 Pell's headstrong faith in herself forms, Rosoff suggests, in response to her appalling, loveless and oppressive family (her father is a drunken itinerant preacher, her mother little more than a wetnurse and servant). Hetty Feather, another neo-Victorian protagonist, shares Pell's determination, but her outspoken confidence seems to arise, in Jacqueline Wilson's hands, from her brief time in a foster family -- as large, poor and chaotic as Pell's, but full of care, if not love. Wilson is, of course, the modern mistress of the orphan: her Tracy Beaker novels have made millions of readers aware of what it's like to go through the care system in contemporary Britain. Hetty, inspired by Wilson's tenure as a Fellow of the Foundling Museum, is of a piece with Dickens' resilient and resourceful children, and the adults who variously try to silence her and encourage her also have a Dickensian charm.

Especially, for me, the wonderful Miss Smith, a children's rights campaigner, an early feminist, one of the many courageous women who fought to end the workhouse system. She appears as a dea ex machina in the final chapters to rescue Hetty from life as a child flower seller -- nowhere near as glamorous as Eliza Doolittle would have us believe -- with its explicit overtones of prostitution. Like Rosoff, Wilson pulls no punches concerning the additional dangers faced by female adventurers: Hetty is, albeit briefly, a runaway from the workhouse, and meets both kindness and extreme creepiness on London's streets. Unlike Pell, though, Hetty not only defends herself and others, but finds her way to a happy ending that plays with, without indulging, the sentimentality of Victorian literature (there's also a tremendous scene in which Hetty is locked in the attic by the matron; unlike Jane Eyre, Hetty gets through the night with comfort from her vivid imagination and a kindly kitchen girl, Ida).

Wilson's ending works because the novel neither caricatures cruel figures as Dickens does, nor creates an unwarranted chain of co-incidences: in fact, Hetty's first hope of maternal love, with the brilliantly-realised circus performer Madame Adeline, is a complete and scarring failure. Wilson's generosity and abounding love for her feisty heroine is balanced by a pragmatic assessment of human nature that Hetty shares, witness her understanding about her foster brother Jem's piecrust promises. There's something charming in the balance, and in the provisional and open ending of the novel, which answers that "what about the other orphans?" question through the work of Miss Smith. Hetty, you feel, will grow up to become a campaigning novelist, too. It's less certain what will happen to the girls at the end of Wishing for Tomorrow, Hilary McKay's sequel to A Little Princess (my favourite childhood read), but like Wilson, McKay offers a suggestive open ending that's much larger than the fate of any one girl -- which is the drive of the whole book. Rather than follow Sara Crewe into her new life of luxury, McKay takes up the perspective of one of A Little Princess' losers. 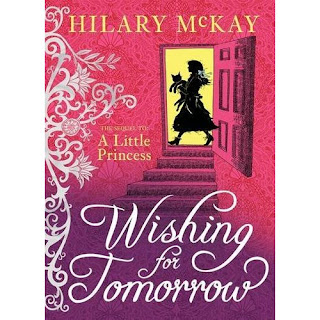 Perhaps it goes without saying that YA writers take the side of the underdog -- the universal experience of the child, for whom the playground is the world of danger, threat, prohibition, bullying, incomprehensible social interactions and powerlessness writ small. But McKay is a particular champion of the different and the dreamers. None of the Casson family are exactly normal (whatever that is, and in their own estimation, I should add), but Permanent Rose -- an force of nature unstoppable by even dyslexia, tigers, New York or divorce -- is one of my favourite voices around. Things just seem to happen around Rose, crazy things that she has accidentally set in motion through her desire to see everyone around her happy. McKay imports some of Rose's unintentional crazy-making and sharp observational skills to Wishing for Tomorrow, where they are divided between the two girls Sara deserted when she moved next door to the Indian gentleman's: the academically-hopeless Ermengarde, who narrates the book, and Lottie, who has grown up from a fit-pitcher to a thoroughly bossy and brilliant girl.

McKay's generous eye for the source of character's bad behaviour even takes in Burnett's two bullies: Lavinia and Miss Minchin. Lavinia, who is actually a wonderful chorus in A Little Princess, constantly commenting on Sara in order to preserve the status quo, is here set free from her mother's voice and revealed as a scholar frustrated by the lack of opportunity for women. It's an utterly believable portrayal of a girl pulling up her bluestocking, one of many historically accurate touches that McKay brings to the fantastical London of Burnett's imagination. As in Hetty Feather, the hierarchies and lines of power are much less rigid than Victorian novels suggest, nodding forward to the great social justice movements of the twentieth century (which, of course, were prompted by campaigning writers like Dickens and Hardy). No-nonsense Epping girl Alice, who replaces Becky as the maid of all work, is a particularly fine character: hard-headed and extremely capable, she more or less runs the school and the girls love her for her kindness.

Even Lavinia, as her thirst for knowledge is satisfied, discovers generosity, an emotional tenor that is the hallmark of McKay's good characters: not a simpering kindness to small animals, but a version of what Sara Crewe has in abundance, the act of being able to imagine the needs and feelings of others, and respond to them rather than be lost in her own misery. Pell, who has the most miserable experience of all these new young Victorians, wrestles with generosity: it's the inclination of her heart over her head that leads to her take her brother with her when she runs away, and even her instinctual suspicion is not enough to deal with an ungenerous world. Like all orphans, though, she finds her alternative family, however provisional and unconventional. It's in her care for horses and the natural world, a reciprocal nurturing, that Pell expresses her kindness, and it's that quality that draws her to the poacher, and guides us into and through her story.
Posted by Delirium's Librarian at 12:21 pm